Phantasy Star IV: The End of the Millennium

As bounty hunter Chaz you'll lead a group of adventurers to save your home planet of Motavia and eventually the whole solar system in this acclaimed RPG from Sega. The final game in the Phantasy Star series' canon.

End of the Millenium

It's been 1000 years since the events that shaped the Algo system in Phantasy Star II. The planet Motavia has been drastically changed from lush and full of life to a massive desert. Magic has all but disappeared from world and day to day life is difficult. On top of this monsters have started appearing and the mysterious Zio is raising a strange cult.

Chaz Ashley is a young bounty hunter and partner to the famous Alys Brangwin. Together they have been sent to investigate strange happenings in the basement of the Piata Academy. Little do they realize that they are beginning a journey that will not only pit them against the forces of Zio and his dark masters but will cross the reaches of space and time.

Phantasy Star IV is a very good example of the typical RPG of the 16-bit era. Characters join or leave the party as the story dictates, and are often replaced with new characters with similar or equally useful abilities. Each character has a set of abilities that is unlocked as they hit specific levels or storyline moments; these are broken down into two categories: Techniques and Skills.

Techniques
Techniques are essentially magic attacks that your characters can use by spending Technique Points (TP). These range from your standard elemental attacks (Foi, Wat, etc) to effects like gravity (Nagra) or healing (Sar). Most characters have some magical ability, except for the android characters Demi and Wren.

Every character has a set of abilities called skills. Each skill has a fixed number of uses (that increases as you level up). Skills are only refreshed at save points and inns (or Alys' house) and are thus it's better to save them until you need them rather than wasting them to kill easier enemies.

Some spells and abilities can combine to create devastating attacks. For example, if you cast Foi, Wat, and Tsu with three different characters (spells that only affect one enemy each) they will combine to form the spell Triblaster, a more powerful attack that will hit all enemies! There are several combo attacks in the game, and in many cases they involve mixing an elemental spell with a technique so that the elemental spell will hit all enemies.

Battles in Phantasy Star IV occur in rounds. At the beginning of each round you will give each character in your party a command that will generally be executed in order of fastest character to slowest (including enemies). However, in order to do some of the more powerful combo attacks certain skills or techniques must be used in the correct order. To do this Phantasy Star IV includes the ability to setup macros: lists of skills and techniques that will occur in the given order. These can be used as shortcuts (for example, if you want all characters to attack) or to setup powerful combo attacks. They are a very handy addition and really help streamline the combat; Macros help with some of the repetition that is found through the genre.

An important aspect of Phantasy Star IV is the vehicles. There are several vehicles ranging from a basic tank to a high tech hovercraft and an ancient starship. Each of the landbased vehicles features a main weapon and several skills that it can use. This is a crucial benefit, because the monsters that you fight while in the vehicles are generally much tougher than monsters you'd fight while not in a vehicle. Also, throughout the game there are points that you cannot pass until you have a certain vehicle. These form some of the main plot points of the game as you search for a way across the obstacle.

The story of Phantasy Star IV is presented, like many RPGS, through a mix of conversation and cutscenes. To provide more color and character to the story the "cutscenes", which are really just conversations for the most part, feature panels of Anime-style art that reflects the characters and situations of the game. These scenes are one of the defining features of the game and definitely set it apart from the Final Fantasy games which were available on the Super Nintendo at the time. They tend to have a lot of color to them including shades of blue to bright neon greens and pinks.

Another defining element of the presentation is the "trail" of characters. Each character in your party will follow the leader around in a trail of up to five characters long (the maximum party size). This means that you see a sprite for each character as you travel around and gives the feel of having a party rather than just a leader and some followers. 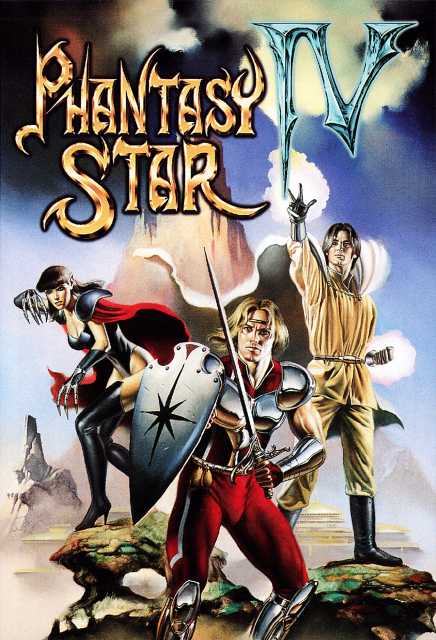