Destroy the competition (literally) while playing basketball under the ownership of basketball's most dirtiest player!

Bill Laimbeer's Combat Basketball is a top down basketball game for the SNES published by Hudson Soft. The game featured no fouls as well as missiles, land mines, and saws that would affect the game when triggered by any player during the game. The game's only real life NBA player, Bill Laimbeer, licensed his name and likeness because of his notoriety as a player who used dirty moves and aggressive tactics. Some of the modes that the game featured were: single player arcade, two player arcade, and season mode. The robust season mode put the player as the owner of a team where they would add new players to their team by buying them.

The game was developed and released on the Amiga and Atari ST in Europe under the name "Future Basketball" one year before Laimbeer's likeness was slapped onto the game. 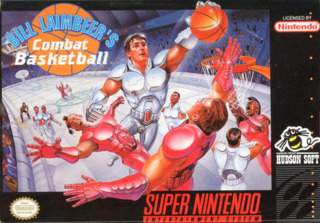