Pocky & Rocky 2 is the follow-up to Natsume's youkai-filled cute 'em up Pocky & Rocky, starring the eponymous shrine maiden and tanooki.

Pocky & Rocky 2 is a top-down shoot 'em up from Natsume and part of their Kiki Kaikai series of shmups with a cartoonish youkai twist. In Japan the game is known as Kiki Kaikai: Tsukiyozoushi (roughly, "Mysterious Ghost World: Tome of Moonlit Night"). Like the original Pocky & Rocky (a.k.a. Kiki Kaikai: Nazo no Kuro Mantle), Pocky & Rocky 2 was released in Japan, the US and Europe. Natsume published the game in the US and Japan, and the European release was handled by Ocean Software.

The game's plot revolves around a kidnapped princess, abducted by demons led by a character named Impy. Pocky (Sayo in the Japanese version) can now be joined with various partners beyond just Rocky (Manuke). These include Bomber Bob (Takuan) and Little Ninja (Shinobi) from the offset, with the additional characters Tengy, Scarecrow, Digger and Ottobot unlocked as the game progresses. All partner characters can temporarily combine with Pocky when she casts her magic, each providing a different benefit. 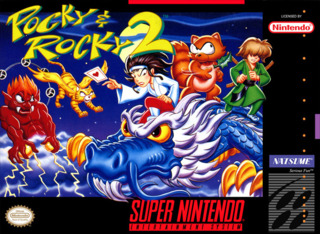