Planetside is a massively multiplayer online first person shooter developed and published by Sony Online Entertainment released in May 2003. SOE CEO John Smedley announced that Planetside would be going Free to Play later in 2012.

Planetside works to blend elements of first person shooters and RPGs in a massively multiplayer setting. Players can choose from an assortment of weapons, armor, equipment, and abilties to outfit their characters with. Each faction has their own varieties of certain weapons and equipment with the rest of the available items to choose from coming from a common pool. Vechicles are also present in the game and, as with equipment, each side has their own variety. Players are able to customize their characters by distributing an allotted number of certifications (often referred to as "certs"), allowing them to unlock items in various categories. Those certification points are earned through the game's RPG mechanics. Players accrue experience points through killing other players and capturing bases and towers. Characters level up in Battle Rank (BR) once they collect enough experience and each BR grants players more of the aforementioned certifications to spend. The highest current BR rank is 40. At BR 40 you receive access to all certifications. Seperate from the BR system is the Command Rank (CR) structure. Command experience points are gained through leading player squads and platoons. The CR system has five ranks, with each level granting players the ability to communicate on a greater scale, with eventually being able to broadcast messages globally, and access to the powerful Orbital Strike attack in the upper ranks.

The game consists of three main factions that the player must join upon starting the game. These are the Terran Republic (TR), the New Conglomerate (NC), and the Vanu Sovereignty (VS). The three factions fight for supremacy in the once-planet-now-galaxy Auraxis through control of individual bases and other points of interest. Each faction gets it's own unique weapons, vehicles, special units, and home contintents. The game can hold up to 399 players (133 for each faction) on a single planet/continent.

The game has progression for players on multiple scales- as a faction basis standard conquest of planets and bases- in a squad/platoon through completing specific objectives- and finally as an individual through ranking up. There are two types of ranks in the game, Battle Rank and Command Rank. Players earn experience points towards Battle Rank through killing enemies, capturing bases, replenishing and repairing bases with resources and so on. However, Command Rank is only gained when the player is the leader of a squad. Command Rank points are earned through capturing bases. Battle Rank allows for players to unlock more vehicles, weapons, implants, and other combat tools, and Command Rank gives the player various tactical abilities including radar scans and orbital strikes.

The Bending and Aftershock- Mid 2004: In game event leads to the destruction of the original Auraxis planet. The continents were reconstructed as individual planets including new "battle islands" replacing Oshur that have special rules applied to each. Aftershock bundled the original Planetside and Core Combat, in addition Battle-Frame Robotics (BFRs) vehicles were released. BFRs are large walking robots similar to mechs that could be piloted by players.

Planetside Reserves- 2006-2007: With the introduction of in-game advertising SOE allowed for players to play on free accounts that restricted several parts of the game. The program is, as of now, defunct.

After discovering space travel through the use of wormholes, humanity spread to planets throughout the galaxy. One such planet was Auraxis. Humans moved into to colonize as they had on so many planets beforehand, but something went terribly wrong. The wormhole connecting Auraxis to the rest of human society collapsed and the planet's inhabitants were cut off from anything else they had previously known. Panic and turmoil soon followed. Out of the choas, the Terran Republic rose as a governing body and attempted to create peace on the planet. Some objected to the Terran Republic's use of its power and influence though. The New Congolmerate and the Vanu Soverignty rose up to challenge the Terran Republic for control of Auraxis. This is the world Planetside deposits the player. Players create a solider for one of the three factions and shoot it out for dominance in Auraxis.

In order to increase your Battle Rank you need to receive Battle Experience. Battle Experience is pretty much just what it sounds like, experience you receive for combat related activities. Some of these activities include killing other players and participating in the capture of a base or tower.

When players group in Planetside they form what are called Squads, with Squads being limited to a maximum of 10 players. Once in a Squad you’ll be able to gain experience from your squadmates and be able to see their location on the map.

The leader of the squad will end up gaining Command Experience instead of Battle Experience in situations such as capturing a base. This Command Experience in turn will increase your character’s Command Rank. As this rank increases you'll gain access to extra command related skills and will be given access to a special chat channel so that you can talk to other Squad leaders. Earlier Command Ranks will allow you to do things such as place waypoints on the map of your squadmates and while higher Command Ranks will give you access to special area attacks via a Command Uplink Device.

In addition to being in a squad, up to three Squads can be combined to form a Platoon. Like in a Squad, members of a Platoon will be able to see the location of all other players within their Platoon. Experience, however, is not divided across the entire Platoon.

In addition to Squads and Platoons players can also join Outfits. Outfits are pretty much just like guilds in other MMOs, including abilities like giving ranks to different members of the Outfit.

Planetside has had two expansions, Core Combat and Aftershock.

In Core Combat six smaller underground caverns where added to the game, providing a close quarters style of combat. In addition a number of new weapons and vehicles were added as well as the Module Benefit System. The Module Benefit System allows players to grant their faction special bonuses when small orbs, called modules, are taken from the underground caverns and installed into a full sized base.

The Aftershock expansion could be considered as only half an expansion. It includes the Core Combat expansion and adds Battle Frame Robotics to the game. Battle Frames are basically big building sized robots that players can pilot, in addition to the existing roster of vehicles. 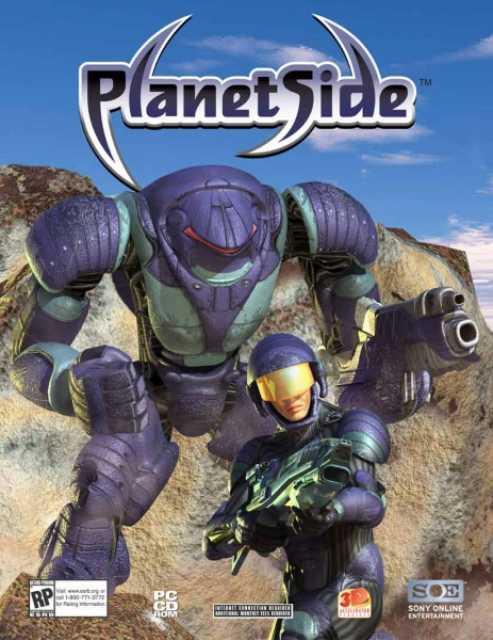