Crash Twinsanity is a Title in the Crash Bandicoot series in which you play as Crash and his Arch-Enemy Neo Cortex. The game features free-roaming levels and is less about collecting crystals, as in the previous games, and more about completing levels.
PlayStation 2

Crash Twinsanity is the second game that was released within the main series to be released on the PS2 and Xbox. This game is also the eleventh game in the series and the fifth chronologically. This game follows the events of Wrath of Cortex. However unlike previous games in the series it introduces a free-roaming game world.

All is well on N. Sanity Island, with the inhabitants happily getting along with their lives. That is, until a newly freed Neo Cortex kidnaps Coco Bandicoot (whilst mid pursuit of a butterfly), and disguises himself as Crash's Sister (though how the creators established this biological link, we'll never know) Cortex then lures Crash over to a bay, where he attacks him with his newest toy, the Mecha-Bandicoot. Once Crash destroys this latest contraption, Crash and Cortex start to fight, and the pair roll through a set of catacombs, on their way to the cave's exit.

Once out of the cave, the pair are confronted by a pair of strange looking blue creatures, that mostly look like deformed parakeets. They refer to themselves as "Evil Twins", and proclaim that they have come to destroy the set of islands that make up the Wumpa Islands. Upon learning that the two critters come from the Tenth Dimension, Crash and Cortex set out to gather the crystals necessary to power the "Psychetron", which will allow them to travel to the tenth dimension . Of course, the pair faced many old enemies on their journey, such as Doctor Nefarious Tropy, and Doctor N. Gin, the man famous for having an unexploded missile lodged in his head. Once the pair gathered the necessary amount of crystals, they entered the 10th dimension, and it was revealed that the "Evil Twins" were actually Cortex's pet parrots, mutated by the Tenth Dimension. After a battle, the Twins are eaten alive by "Evil Crash", the Tenth Dimension's version of the titular bandicoot.

In the ending of the game, Cortex of course attempts to send Crash to the Tenth Dimension, but his device malfunctions in a way that can only be described as "comical", trapping him inside Crash's brain instead. 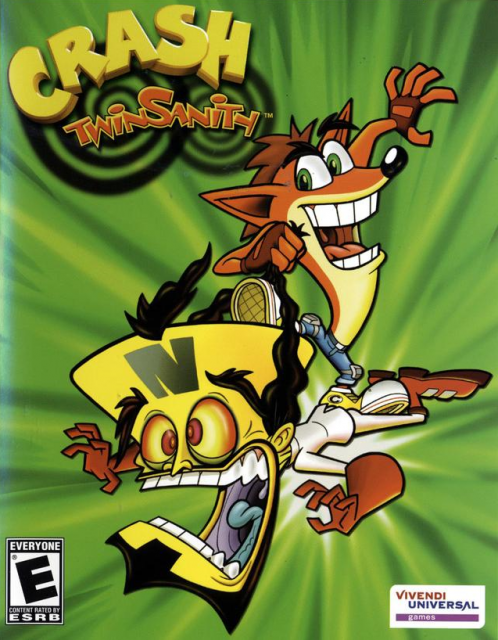