Ace Combat 5: The Unsung War is an arcade flight combat game. Escalating hostilities between the nation of Osea and its neighbor across the Pacific Ocean, Yuktobania, culminate in all out war between the two nations. The pilots of Wardog Squadron fight to restore peace between the embattled nations.
PlayStation 2 PlayStation 4

Released on October 25, 2004 exclusively for the PlayStation 2, Ace Combat 5: The Unsung War is the fifth game in Namco Bandai's flight combat series and the second game on the PlayStation 2, preceded by Ace Combat 04: Shattered Skies, and followed up with a prequel, Ace Combat Zero: The Belkan War. In Europe the game was released as Ace Combat 5: Squadron Leader. The game received critical and commercial success following its release.

The player takes on the role of Blaze, a trainee pilot in the Osean Air Defence Force who is called into active service with Wardog Squadron, based out of Sand Island Air Base. The squadron initially consists of Alvin H. Davenport (Chopper), Kei Nagase (Edge) and flight lead Jack Bartlett (Heartbreak 1). Jack Bartlett and Kei Nagase are the sole survivors of a brutal attack by what turn out to be Yuktobanian aircraft on a flight training exercise at Sand Island, one of a number of incidents that lead Osea into all out war with Yuktobania. The members of Wardog Squadron go from heroes, to demons, to ghosts in an ambitious story chronicling the war throughout its duration, and the conspiracy that started it.

In Arcade Mode, the player resumes control of Mobius One. One year after the conclusion of the Usean Continental War in Ace Combat 4, Erusean extremists have captured a weapons factory and resumed attacks on the ISAF. The ISAF dispatches Mobius One and AWACS Sky Eye to quell the extremists.

The geopolitical aspects of Ace Combat 5's universe in particular run parallel to to World War Two and the ensuing Cold War. The fictional Belkan War (explored further in Ace Combat Zero: The Belkan War) is the foundation on which Ace Combat 5's Circum-Pacific War is built upon, and resembles in many respects the German invasion of greater Europe in 1939 along with their eventual defeat. During the Belkan War Yuktobania and Osea were unified and fought to combat Belkan aggression, as the United States and Russia cooperated to fight Nazi Germany. In the 15 years after the dramatic end of The Belkan War, relations between the nations of Yuktobania and Osea sour in a similar fashion to US-Soviet relations after World War 2. A conspiracy by a Belkan paramilitary organization posing as both Yuktobanian and Osean fighter squadrons leads to war. In many ways Osea is meant to resemble the United States thematically, while Yuktobania is a loose caricature of Russia. In addition, a Pearl Harbor style attack by Yuktobanian forces on Port St. Hewlett in the opening missions of the game is indicative of a significant undercurrent of World War 2 Pacific Theater themes, and related themes of nuclear prohibition that are discussed throughout the game.

Ace Combat 5 features 53 playable aircraft, the most aircraft in an Ace Combat game to date. 51 of the aircraft exist in real life and 2 are fictional. Aircraft are grouped into families such as the F-14 family consisting of the F-14A, F-14B, and F-14D. The base model in the family is unlocked by completing missions. Advanced models in the family are unlocked by filling the base model's "kill gauge". The "kill gauge" fills up from shooting down enemies. Both the player's and the wingmen's kills count toward the "kill gauge". Shooting down enemies on higher difficulties awards more points toward the "kill gauge". Each plane has three paint schemes that can be unlocked by fulfilling certain conditions. Unlike other Ace Combat games, each plane only has one special weapon. 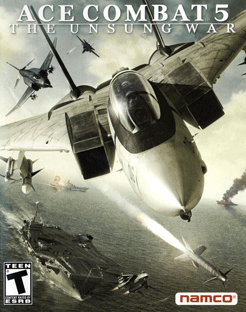