Ben and Andy try to prevent Mr. X from taking over the world in this top-down, bomb-planting run 'n' gun arcade shooter from Sega.

Crack Down is a top-down action/shooter arcade game, developed and published by Sega and released in 1989. It was later ported to a variety of home consoles and computers. The goal of the game is to navigate mazes full of enemies to find critical areas to plant a series of bombs, and then escape their blast by exiting the stage.

The game is specifically built for two players. When a second player isn't available, their corner of the screen is left blank (in the Genesis port, the space is used to display hints about enemies instead).

Ben and Andy are top-secret agents. A mad scientist by the name of Mr. X (Mr. K in the Mega Drive version) has begun overrunning the city with artificial lifeforms, including his ultimate experiment, a synthetic devil. Ben and Andy are charged with clearing the city and taking down Mr. X, by terminating Mr. X's cyborg army and planting smart-bombs. 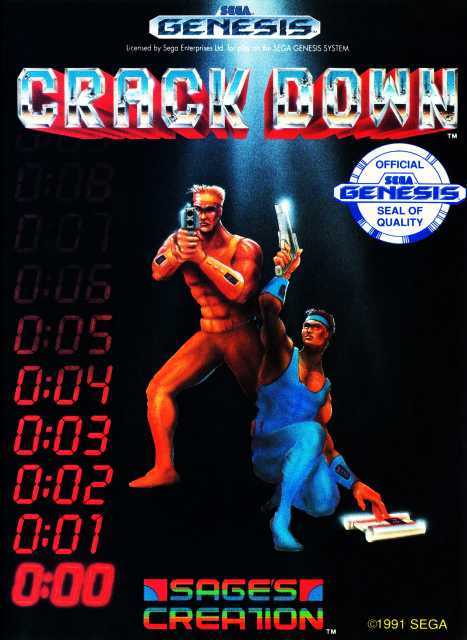