Enjoy barrel blasting, special powers, and saving the Kongs from King K. Rool in the Nintendo 64 installment of the Donkey Kong series.

Donkey Kong 64 is a game by Rare for the Nintendo 64. The first 3D platformer Rare created after Banjo Kazooie, Donkey Kong 64 featured higher resolution textures and graphics (thanks to the N64 dual ram "Expansion Pack" that was included with the game), but also featured more collection quests and more items to collect.

It is regarded as one of the biggest and longest single player video games ever created, due to it's very large amount of collectibles and missions for the player to complete.

Donkey Kong 64 is a 3-D platformer where players guide all five members of the "Kong family" (including Donkey Kong and Diddy Kong) to recollect their horde of Golden Bananas. Each Kong has their own abilities and characteristics, as well as their own unique collectibles, meaning each world has five different sets of collectible items.

The Golden Bananas have been hidden across eight unique worlds. On each world there are five golden bananas for each Kong to collect and a boss to be defeated. In order to open the door that locks the boss the players need to gather as many regular bananas as possible and feed them to a hippopotamus that guards the door.

When defeating the boss the Kongs will get a golden key that will allow them to help a giant Kremlin – K. Lumsy – who has been locked up by King K. Rool. When using the key to unlock part of his cage, K. Lumsy will jump with joy and cause an earthquake that will open the following world. When reaching the entrance to another world, the player will use the Golden Bananas to finally gain entrance to a new area.

The worlds are filled with different challenges that will make use of all of the Kongs' many abilities. Some mini-games can also be found within each world, the reward earned for beating them is usually a Golden Banana.

On their adventure, the players are aided by other famous members of the Kong family such as Funky (who provides guns for all the five Kongs), Candy (who teaches them how to play different instruments), and Cranky (who will give potions that will make the Kongs learn new moves).

K. Rool has an evil plan to destroy all the Kongs, and their island, using a massive laser called the "Blast-O-Matic." But, due to his clumsy Kremlins, his ship crashes on a big rock in the ocean, which causes his weapon to malfunction.

He sends his underlings to lock-away some of the Kongs, and steal Donkey Kong’s banana hoard once again, in order to have time to fix his weapon and attain his goal.

Donkey Kong – The initial character and the most balanced of all the Kongs, he uses a coconut gun as a weapon and plays the bongos.

Diddy Kong – He is not very strong but he is fairly quick, and he can perform long jumps. He uses two peanut popguns and plays the guitar.

Lanky Kong – An orangutan with long arms that help him swim quickly and stay in the air for a while after jumping. He uses a grape shooter and plays the trombone.

Tiny Kong – The smallest Kong- she can use her ponytails to fly (similar to Dixie Kong in Donkey Kong Country 2). She uses a feather crossbow as a weapon and plays the saxophone.

Chunky Kong – He is very slow, but also extremely strong. He uses a pineapple launcher and plays the triangle.

DK Isles – The over world of the game. It is composed of the main island (in the shape of Donkey Kong's head) and several smaller isles surrounding it.

Jungle Japes – The first world of the game- a classic Donkey Kong jungle with some caves to be explored and vast areas of trees and green grass.

Frantic Factory – A strange and dangerous toy factory, this level has a variety of machines and development rooms where the Kongs will have to play with K. Rool’s latest cruel inventions.

Gloomy Galleon – A water level that is composed of two large lakes and a variety of dangerous sunken ships.

Fungi Forest – A mysterious forest with a big clock at its center that controls time. (The Kongs must switch between night and day to unlock all of Fungi Forest's secrets.)

Crystal Caves – An underground cavern that suffers from frequent earthquakes due to a particularly nasty Kremling.

Creepy Castle – An old castle and its surrounding grounds- this level is chock full of ghosts and other ghouls.

Hideout Helm – The headquarters of the Kremlings and the notorious Blast-O-Matic laser.

Each of the five members of the Kong clan will learn unique moves to help them collect Golden Bananas. Each Kong has one special move that requires them to jump into a barrel with their face on it- these special moves use Crystal Coconuts, which can be found lying around the levels. These moves are marked below by a 'CC'.

Golden Banana - The main item of the game. There are 25 hidden on each world five for each Kong.

Regular Banana - Collect them to battle the boss of the respective world. There are 100 of them for each Kong on each of the game’s seven worlds.

Blue Print - Blueprints of K. Rool’s powerful laser, the Blast-O-Matic. Snide will give the Kongs a Golden Banana for each one of the forty blueprints they collect during the game.

Banana Medal - There are five on each level, one for each one of the Kongs. They can be acquired after collecting 75 regular bananas.

Banana Fairy - Hidden carefully throughout the game, there are twenty missing banana fairies to be found. They can be captured using the Banana Camera, which uses Banana Film.

Crown - Earned after winning an arena battle against a group of Kremlings.

Nintendo Coin - Beat the Donkey Kong arcade twice to get this coin. Required to finish the game.

Rareware Coin - Get at least 5000 points in Jetpak – an old game that Cranky Kong lets the Kongs play after they've collected 15 banana medals. It is also needed to finish the game.

The game featured a multiplayer mode where the player can play as any of the five Kongs and one bonus character, Krusha. It is played in the style of a 3rd person shooter. Each Kong uses his or her specific gun, that is also seen in the story mode, to dole out damage. The players travel around the arena picking up ammo, grenades, and pieces of watermelon that regain health. They must work to accomplish the objective at hand, which is determined by the game mode they have chosen.

Arenas are Monkey Smash Arena's one through three. Each are enclosed spaces, often multi-layered, and usually divided into sections that are used as spawn points.

There are six different game modes the player can choose from, each with its own special set of rules and objectives.

A sort of death match. Each player is given a limited amount of lives, the game is played until players have lost all their lives and one Kong remains standing.

In this game a set amount of kills in put in place at the beginning of the match, when this number of kills is reached by a player, they are the winner.

A time limit is set, and players battle to see who can achieve the most kills in the time limit provided.

Players race to collect as many coins from the map as they can within the time limit.

A coin appears on the map, players must race to grab the coin, and hold it for as long as they can to earn as many points as they can before time runs out.

Once again, players race to get the coin somewhere on the map. When a player has the coin, they must travel over pads in order to earn the most points they can before time runs out.

Donkey Kong was well received among reviewers, but it fell short when compared to other Rare platformers like the Banjo-Kazooie franchise. The main complaint was that the game presented too many things to collect and that it was simply too long.

However, many praised the amazing graphics which were generated with the help of the expansion pack. The game was also praised for it's large amount of content.

The DK Rap was a rather long and catchy tune played at the beginning of the game before the menu screen. The rap featured brief descriptions of each character, and the use of the word "hell".While the rap and accompanying cutscene was almost assuredly meant as tongue in cheek the bizarre nature of it has nonetheless made the DK Rap somewhat of an injoke among fans of the series.

So they're finally here,

If you know the words

you can join in too.

Put your hands together,

If you want to clap,

As we take you through,

He's the leader of the bunch,

You know him well,

To kick some tail.

Can fire in spurts,

If he shoots ya,

This Kong's got style,

So listen up dude.

She can shrink her size,

To suit her mood.

When she needs to be.

She can float through the air,

And climb up trees.

If you choose her,

With a skip and a hop,

He has no style,

He has no grace.

Has a funny face.

When he needs to.

And stretch his arms out,

And about time too.

He's in the mood.

He can fly real high,

With his jetpack on.

With his pistols out,

When he plays his tune.

Cause he's after you.

He's here for you.

It's the last member,

This Kong's so strong,

Can make a Kremling,

Cry out for mommy.

Can pick up a boulder,

Seem such a breeze.

He may move slow,

One hell of a guy.

Take it to the fridge! 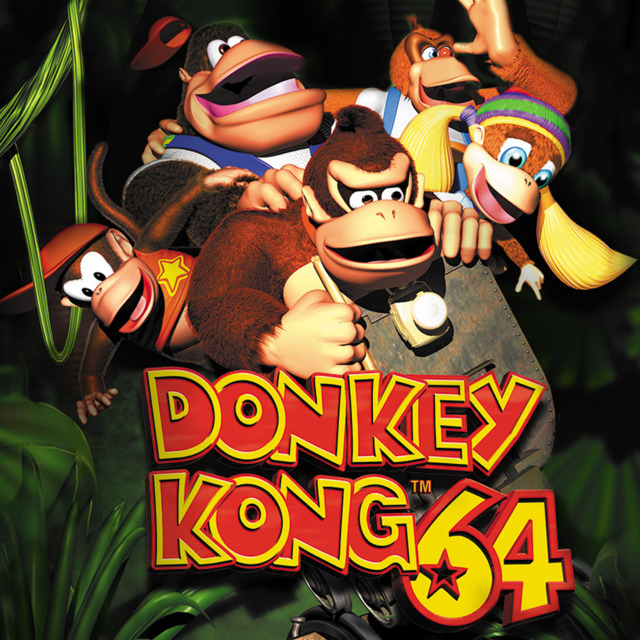