In this side-scrolling action game, up to two players infiltrate enemy bases armed initially with only their knives. As they move from left to right they will find "power up" weapons like bazookas, grenades, and flame throwers. Defeat the bosses at the end of each level to win. Also known as Green Beret, this was one of the first side-scrolling, run & gun shooters.

A side-scrolling action platformer where the hero infiltrates an enemy camp and slaughters pretty much everyone. Along the way he'll gather weapons which he can use to eliminate opponents, but all weapons have limited uses, so use them wisely!

First released for the arcades in 1985, Rush'n Attack / Green Beret was one of the first side-scrolling, run & gun shooters, paving the way for franchises such as Contra, Bionic Commando, and Metal Slug.

The main character's basic weapon is his knife, which the player be using a lot through the course of the game. If timed just right, it can defeat most of the unarmed grunts in the game. In addition to unarmed troops there's also mortar launching soldiers, soldiers with weapons (some of which can be acquired once they die), paratroopers, gyrocopter pilots, and lil' dogs.

Players die on a single hit, as with many of these combat oriented games, so intense concentration is key, as is proper management of weapons. For instance, the flamethrower, no matter how many are picked up, only has three maximum shots. It can hit a complete row of onscreen enemies, so it might be worth hanging on to one for the end rush of troops that exit the troop carrier at the end of the first level.

The ultimate goal is to rescue the prisoners of war, who can be seen tied up in the teaser opening screen. Play progresses first through a missile base (flamethrower available), followed by a harbor (bazooka), and then over the bridge (grenades). Finally, the POWs are rescued in the prisoner camp, and are treated to a fourth-wall breaking animation where all four POWs and other green berets salute the player for a job well done.

For the curious: the default score to beat in the arcade version is 32,000 points. 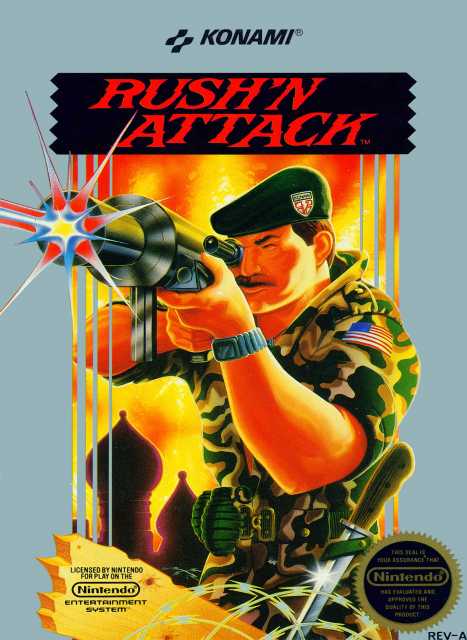