Released in 2007, F.E.A.R. : Perseus Mandate is the second expansion to the 2005 horror shooter, F.E.A.R. While being an expansion pack the game can also be played standalone without the need for the original title. Perseus mandate was developed by TimeGate Studios, the same developers responsible for the first expansion pack, Extraction Point. While the original title and the first expansion focused on one main character ('the Point Man'), Perseus Mandate sees the introduction of a new protagonist ('the Sergeant'), which allows the events in the game to run concurrently with the events in both F.E.A.R. and Extraction Point. However, it should be noted that the sequel to F.E.A.R, F.E.A.R 2: Project Origin, ignores the events of this expansion pack as well as Extraction Point.

Perseus Mandate introduces a variety of new weapons and foes. Of the former, there's a Grenade Launcher, a Lightning Gun (with arcing between foes) and a three-round-burst rifle with an Infrared Scope, allowing the Player to see enemies more clearly in darkness and through smoke and debris. Of the latter, there's a new supernatural creature that hides in pools of darkness on the floor and ambushes the unwary, holding them in place while clawing at them. There's also a Paramilitary Faction (the 'Nightcrawlers') who oppose the Player - comprised of Standard Soldiers (Special Ops/Commando types, equipped with many of the new weapons) and Elites (whose abilities are similar to the Player's, and to the Assassins from the original F.E.A.R..) 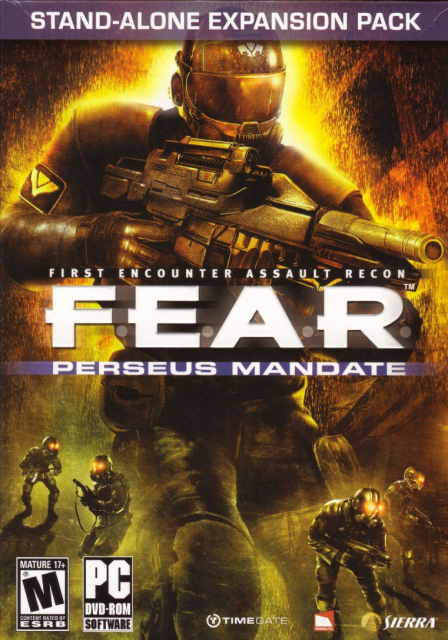