The seventh installment of SNK's King of Fighters series and the last game they developed before their bankruptcy. It features an expansion of the "Striker" system, including numerous Striker-only characters for additional options.

The King of Fighters 2000 is a 2D tag-team fighting game developed and released by SNK for arcades (running Neo Geo MVS hardware) on July 26, 2000. It was subsequently released (in all regions except North America) for the Neo Geo AES later that year.

As the second part of the three-part "NESTS Saga" arc, the story takes place after the events of the previous King of Fighters tournament (where NESTS agent Krizalid was defeated, his army of Kyo Kusanagi clones are destroyed, and K' and Maxima are revealed to be NESTS defectors). Determined to investigate the secret organization, the Ikari Warriors commander Heidern (with assistance from fellow commander Ling) secretly hosts a new King of Fighters tournament in South Town to lure K' and Maxima out for interrogation. In the background, however, a new agent of NESTS is sent to exterminate K' (the mysterious cryokinetic Kula Diamond).

The game is notable for being the last game developed by the original SNK studio before they entered bankruptcy.

The King of Fighters 2000 plays like a traditional 2D fighting game, using four buttons (Light Punch, Light Kick, Strong Punch, and Strong Kick). Most of the gameplay remains the same as its predecessor, with some new additions and changes (including updated movelists for all characters).

The game now includes two team-based modes (which can be switched by the arcade operator or in the home version):

Main Changes from King of Fighters '99

Each player has their own Power Gauge, now displayed at the top of the screen under the lifebar. The gauge is charged mainly by performing special moves, but is also charged at a slower pace by both giving and receiving damage. When a player fills the gauge up, it is stored and, if the player has less than three gauges stored, a new gauge replaces it. When a fighter is defeated, the progress of the current gauge is lost, but all stored gauges are kept.

Each stored gauge can be used to activate one of three things: a Super Special Move, a Guard Cancel Dodge, or a Guard Cancel Attack. It can also be used while taunting to replenish a Strike Bomb slot. If the player has three stored gauges (replacing the "POW" on the gauge with "MAX"), they can use all three to perform either a more powerful MAX Super Special Move or one of two timed power-up states:

If either power-up state finishes mid-round, then the Power Gauge also disappears for 12 seconds (where it cannot be filled up).

Each player has access to a unique limited-use assist character (or "Striker") that jumps into the fray and performs a unique assist attack (done by pressing both Light Kick and Strong Punch, or B+C, simultaneously). Unlike the previous game, Strikers can be summoned at any time during the match (even when attacking and when stunned by attacks).

Players can only call-in their Striker by using up a limited amount of "Strike Bombs" given. At the beginning of the match, each player has three Strike Bomb slots filled up. When a fighter on their team is defeated, they are given an additional Strike Bomb slot (giving them a maximum total of five). Players automatically replenish one of their Strike Bombs after a fighter on their team is defeated, and can also replenish one manually using a taunt (alongside a stored Power Gauge).

The game's roster is mostly unchanged from The King of Fighters '99, including 35 playable fighters (32 of which are split into 8 teams).

The roster includes 6 new additions (one of which is a hidden sub-boss), some of them replacements. The Hero Team is split-up into two (the new "Hero Team", led by K', and the "Benimaru Team", led by Benimaru), each with new characters to fill both teams. Some characters in the Women Fighters Team are switched with fighters in other teams (namely Blue Mary is switched with Mai Shiranui for the Fatal Fury Team and King is switched with Yuri Sakazaki for the Art of Fighting Team). Along with both Kyo Kusanagi clones, only Li Xiangfei departs from the roster (being replaced with newcomer Hinako Shijo).

After choosing the three fighters in their team, players can opt for an alternate, or "Extra" Striker based on the remaining character. These are non-canonical. 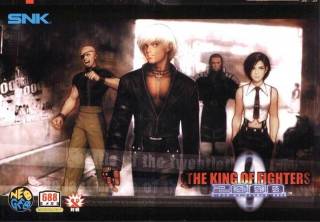