Fade to Black is a third person action adventure and the sequel to Flashback. You play as Conrad B. Hart who wakes up from cryosleep only to be imprisoned by his former adversaries, the morphs, in New Alcatraz.

This 1995 DOS and later Playstation game, develped by Delphine Software International and published by Electronic Arts, is a sequel to the critically acclaimed Flashback: The Quest for Identity. The plot follows Conrad B. Hart, who has awoken from Cryogenic sleep, and has been taken prisoner on the Lunar prison of New Alcatraz. Fade To Black did not receive such good critical response, compared to Flashback, possibly because of un-user-friendly level design and awkward interface. The playstation version is available to download for PS3 in the EU. The planned sequel, Flashback Legends was canceled due to the company's bankruptcy in 2002. 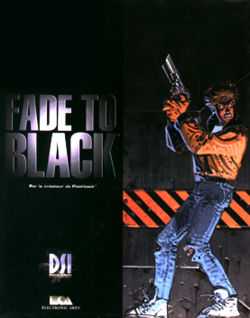