Time Crisis is a light-gun shooter developed and released by Namco for arcades (using Namco System 22 hardware) in December 1995.

Set in a remote island off the coast of the fictional republic of Sercia, Time Crisis has players taking control of agent Richard Miller as he infiltrates an old castle to rescue the President of Sercia's daughter Rachel from the "Wild Dogs" syndicate (under hire from Sherudo, the last blood relative of the Garo royal family).

The game utilizes the handgun light gun from Namco's 1994 arcade game Point Blank, which simulates a firearm's "blowback" (and providing gun recoil) by springing the slide back-and-forth on each shot. In addition, the game introduces the cover system to the genre, in which players can duck behind cover to avoid enemy fire and hazards while automatically reloading their weapon. The cover system makes use of a large floor pedal (the "Action Pedal"), which must be held down in order to get out of cover. To prevent players from abusing this system, players cannot fire their weapon while in cover and are timed (forcing players to take risks in order to not lose their credit). The game was sold in both standard and deluxe cabinets and is single-player only.

Time Crisis includes three stages, each with a unique boss encounter. Along with the main Story Mode, the game includes a "Timed Mode" which limits the player to one stage (of their choosing) but grants infinite lives. The game received numerous sequels and spin-offs since its original release.

The game was later ported to the Sony PlayStation in 1997 (June 27 in Japan, October 31 in North America, and November 30 in Europe). The Japanese and European versions also had a bundle with Namco's GunCon peripheral, which used an auxiliary button on the sides of the gun for the Action Pedal system. In addition, this version includes a bonus story mode (known as "Special") in which Richard must infiltrate a hotel (which is a front for a weapons factory) to hunt down the leader of the "Kantaris" syndicate. The Special mode features alternate paths and multiple endings.

It was also ported to the PlayStation 2 as part of the 2002 Japanese compilation Gunvari Collection + Time Crisis. This version supports Namco's GunCon 2 peripheral.

The plot of this game is that there is an attempted coup in the republic of Sercia. The Garo family had ruled Sercia for a millennium. But in 1995, the VSSE Interantonal Intelligence Agency sent William MacPherson, who was able to topple the Garo regime and become the first democratically elected president.Sheruda Garo, the last member of the Garo family, sought to recapture the throne from the new president, President MacPherson. Sheruda sends a mercenary to kidnap the president's daughter, Rachel. Garo tries to blackmail the new government by demanding military secrets in trade for the president's daughters life. If the secrets were not delivered by sunset or else Rachel would be killed. The VSSE decides to send an agent, Richard Miller (The Player), to infiltrate Garo's castle and rescue Rachel. After being sent into a trap, Miller discovers the real location of Rachel. He battles his way up Garo's castle to the upper levels and eventually finds Rachel. But as he attempts to rescue her, the mercenary, Wild Dog, captures her again and and drags her away. Miller pursues Wild Dog outside of the castle to their final battle point, a bridge. Wild dog begins to blow up the castle in a last ditch effort to escape. Miller is able to get Rachel and escape before the castle and WIld dog is engulfed in the explosion. 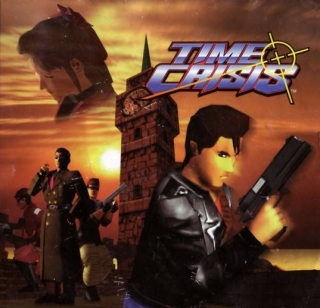