Ty the Tasmanian Tiger 2: Bush Rescue expands on the game play of the first game, but features new elements, such as driving sequences, mech battles, and an expanded world. In Ty 2, Ty must fight Boss Cass once again to save the Australian outback.
Game Boy Advance PlayStation 2

Ty the Tasmanian Tiger 2: Bush Rescue is the second part of the Ty the Tasmanian Tiger trilogy, started with Ty the Tasmanian Tiger, and concluded with Ty the Tasmanian Tiger 3: Night of the Quinkan. The game has the same core elements as the original, but new features, like driving and Arena battles. The game also changes from a level based system like the first game to a more structured, mission based game similar to Jak II. The game features driving sectuions, and the main world is very large, and is acessed by driving around in a 4x4 Jeep. Indeed, driving elements make up a large part of the game, as some of the combat is fought in mechs. Some missions consist entirely of objective- based goals, like putting out a set number of fires with a helicopter. This game was recieved better than the first. It was produced by Krome  Studios and published by EA Games. It was released on the 12 October 2004 in North America, and on the 5 Novemeber 2004 for PAL Regions.

Ty the Tasmanian Tiger 2: Bush Rescue is set in the Australian Outback, in a hub world called Burramudgee. Burramudgee is a significantly larger hub world than the original's Rainbow Cliffs, and features pedestrians who Ty can talk to, vehicles that are un-driveable, Bush rescue's base of operations, and a Driving garage where Sheila has parked the 4x4, and Ty can exit into the massive outside world. After Boss Cass breaks out of jail with the aid of Fluffy and her mech, he sets up his own community to grant himself 'Diplomatic Immunity', so Ty can't apprehend him without proof. Dennis sets up a rescue service called 'Bush rescue' to aid Ty in his attempt to bring Boss Cass to justice and help other civilians from Boss Cass's evil plans, which include making a race of Uber Lizards, taking control of Burramudgee, and absconding with the local population. Ty must race to save his family and friends once again.

Ty the tasmanian Tiger 2: Bush Rescue changes formula from the first, switching from a collection-based game to a misson-based platformer that has Ty traversing large spaces and bigger environments than the first,  sometimes with the aid of friendly characters or vehicles. This game features mechs fairly heavily, and contains a lot of vehicle segments. This game also expands Ty's original aresenal of Boomerangs, but the player has to buy them now instead of collecting Golden Cogs. The boomerangs can also be upgraded to a second, stronger form, which increases the boomerangs usefulness.

The list of people in Ty 2 has been expanded featuring all of the old characters and some new faces.

Ty is the main character of Ty 2: Bush Rescue, and is the head of said organisation. He will do anything to save his friends.

Sheila is Ty's girlfriend, and plays a much more active role in this game, even accompanying Ty on some of his missions. She helps Ty in his final battle agains Boss Cass, and helps repel the Frill Lizard invaders of Burramudgee.

A mad scientist always after plutonium, Julius the Koala is Bush Rescue's resident mechanic/technician. He gives Ty some new gadgets, as well as giving him missions.

Originally evil, Sly the Tasmanian Tiger is Ty's best friend. As well as helping him out on missions, he will sell Boomerang upgrades to Ty if you can find him.

A park ranger who is utterly devoted to his work. He offers dangerous jobs like fling a helicopter to put out a forest fire and clearing crocodiles out from the sewers underneath Burramudgee.

Cheif Blinky is a poilice officer who introduces Mechs to Ty. He gets wounded near the beginning, but recovers and is bent on seeing Boss Cass in Jail.

Ty's parents run a boomerang store that Ty can purchase all of his Level 1 boomerangs at. The shop is located in Burramudgee.

Ty's sister and her boyfriend have opened a theme park in the billabong, and are short on visitors. They need help with a few problems, but only appear in the Billabong area.

Steve is addicted to Goobooberries, and if you find enough he will give you hundreds of Opals (Curreny) as well as reiterating his tales of woe about how he lost his Gooboo juice.

Fluffy is Boss Cass's replacement for Sly. She is a female Blue Tounge, and she is eaisily swayed by Opals. She is the instigator of most of the Boss Battles in the game, often luring Ty to an area that's in peril.

He is Ty's arch nemesis, and plans to breed a race of warm-blooded Frill Lizards called Uber Lizards and use them to destroy Burramudgee and take over Southern Australia.

Dennis is the founder of Bush Rescue, and is still as pompous as ever. He's become a master chef in the time since Ty the Tasmanian Tiger.

Maurie has a relatively small part in this game, but he is the second in command of Bush Rescue.

Frill Lizards are just as pathetic as they were in the first game, only this time they have laser guns.

Warm blooded Frill Lizards, they can only be combated by either a mech or one of Sly's boomerangs.
Dr. Muto Haven: Call of the King Looney Tunes: Back in Action Super Mario Sunshine Kya: Dark Lineage Malice Insecticide Scaler Sphinx and the Cursed Mummy Tokobot Plus: Mysteries of the Karakuri Vexx Tak and the Power of Juju Jak and Daxter: The Lost Frontier Ape Escape 3 Astérix & Obélix XXL 2: Mission: Las Vegum Ruff Trigger: The Vanocore Conspiracy Ty the Tasmanian Tiger Ty the Tasmanian Tiger 3: Night of the Quinkan Sly Cooper and the Thievius Raccoonus Sly 2: Band of Thieves Sly 3: Honor Among Thieves Kao the Kangaroo Round 2 I-Ninja 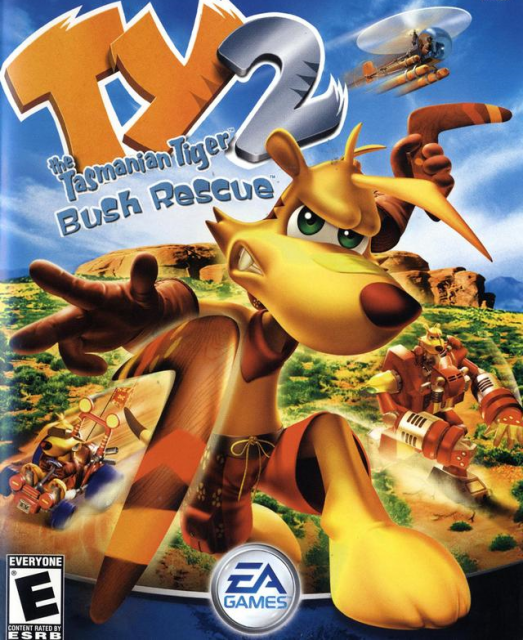