Cute but challenging, I-Ninja is a third-person adventure that mixes in all kinds of gameplay.
PlayStation 2

I-Ninja is a cartoony third-person action-adventure platformer developed by Argonaut Games. The main draw of I-Ninja is the large variety of gameplay, and its optional challenges are surprisingly tough considering the friendly super-deformed-style presentation. I-Ninja received fairly good reviews but has remained somewhat of a cult classic. The story of I-Ninja starts when the hero - simply known as Ninja - finds a Rage Stone, touches it, flips out and kills his master. The master transforms into a ghost, leading the Ninja in a quest to defeat the evil O-Dor's armies and find the rest of the Rage Stones before O-Dor can get his hands on them.

The Ninja can use traditional platforming moves, such as double-jumping, wall-running, kick-jumping between walls and a grappling hook. The levels also include Ratchet and Clank-style grind rails. In the fighting department, the Ninja can use special moves like a lifting uppercut, a spin attack and a leaping overhead smash in addition to regular sword combos. The Rage Stones, received after boss fights, offer more powerful abilities that use a meter charged by regular attacks; these abilities include healing, berserk rage and invincibility. Missions are found within hub-like levels that have color-coded doors. Completing a mission gives the Ninja a grade, and getting enough grades results in a new belt - ranging from white to black - that allows access to new missions. The Ninja's sword can also be upgraded by killing enemies. Not content with regular platforming, I-Ninja throws in quite a lot of different gameplay mechanics. One of the recurring obstacles is a Ninja Ball that must be rolled along with narrow platforms in the style of Marble Madness. Every boss battle also features a new type of gameplay and is preceded by a tutorial. Levels can be replayed with multiple objectives such as time limits or killing a specific number of enemies. Extra minigame levels can be purchased with coins, or "coinage", scattered throughout levels. 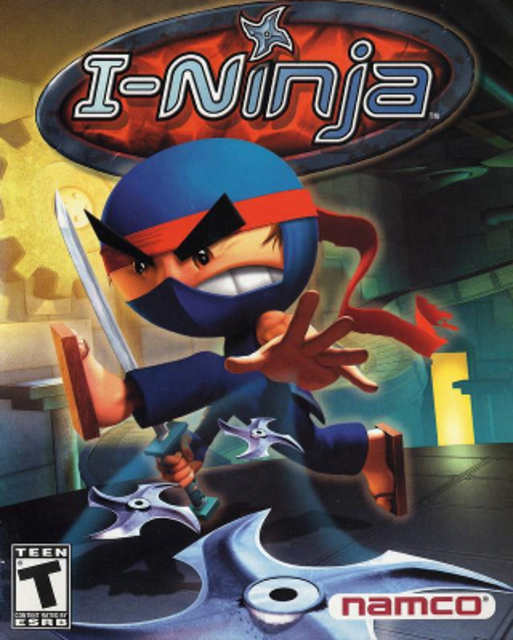