A dual-joystick Arcade shooter ported to nearly every contemporary system. Contestants gear up to win fantastic prizes on the most violent game show on TV.

Smash TV is Eugene Jarvis' spiritual successor to Robotron: 2084, an early Arcade game that is one of the first examples of the twin stick control method. Smash TV retains this same gameplay, using the left joystick to move and the right to shoot, allowing a player to move in one direction while firing in another.

The year is 1999. A new game show called Smash TV was created which puts its contenders to the fight for their lives. They will have to kill hundreds of enemies and collect money and prizes (from toasters to a big-screen TV). The inspiration for Smash TV seems to be the Arnold Schwarzenegger film, The Running Man. Two players can play simultaneously, and at the end of each of the three levels, the two players' performance is compared, with one being declared the winner.

Each level ends with a boss battle. The first level pits the players against Mutoid Man. The second boss is a giant, round face named Scarface. The third level seemingly ends with a fight against two large, robotic snake heads called Die Cobros. But this is immediately followed by the game's true boss, the game show host himself called Evil M.C. This battle is essentially a tougher version of the Mutoid Man boss fight.

After its success in coin-operated form, Smash TV was brought to the home market on many different console and computer platforms. Home game consoles of the era were not equipped with multi-joystick controllers; alternative control schemes were implemented to approximate the controls of the arcade original. While some versions use buttons to fire in a direction, or to toggle a direction, others use multiple controllers' joysticks. Acclaim's SNES version of the game, Super Smash TV (referred to by its original name within the game), used the D-pad and face buttons to duplicate the two joysticks of the original. The SNES version also contains additional secret rooms.

The Xbox Live Arcade version of the game, which is an emulation of the original arcade release, controls with its two joysticks. It is also the only version to include online play, letting two players play the game over the Internet.

This game is featured on Midway Arcade Treasures for the Gamecube, Playstation 2, Xbox, and PC.

Due to a glitch in the Xbox Live Arcade version of the game, 360 users are unable to obtain the full 200 achievement points available in the game. The Game Master Achievement (in theory obtained by beating the game without continuing on default systems) does not unlock, denying gamers the game's final 50 points. The publishers have acknowledged the problem, but there are currently no plans to fix the issue.

Though Smash TV never received a proper sequel, many of the same people responsible for the game went on to produce Total Carnage, a game that maintained the same control style and applied it to a vertical scrolling world, similar to Ikari Warriors or Mercs. There are plenty of references to Smash TV in Total Carnage. 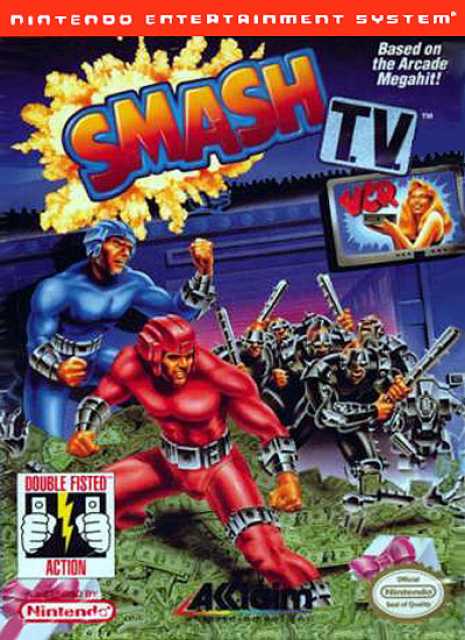