Set 60 years after the original BloodRayne, this sequel pits the dhampir Rayne against her vampire half-siblings, who have banded together to create a new era of demonic supremacy.
PlayStation 2

BloodRayne 2 is a horror-themed action game developed by Terminal Reality and published by Majesco for the PlayStation 2 and Xbox in North America on October 12, 2004. A PC port was released in North America on August 2, 2005. All versions were later released in Europe by THQ on February 17, 2006. The Russian PC port was published by Buka Entertainment.

BloodRayne 2 does not directly follow on from the first game. Instead, it is set some 60 years later and follows Rayne as she battles against the Cult of Kagan; the offspring of Rayne's evil father.

The Cult of Kagan has developed a substance known as "The Shroud" which not only renders the sun's rays harmless to vampires but corrupts nature itself. Using this substance, the Cult of Kagan plans to bring about a new age of vampiric supremacy and reduce humanity to mere cattle.

Many areas of BloodRayne 2 have been changed from its predecessor. Very much akin to the original BloodRayne you fight in a third-person perspective, now the gameplay is more focused on melee combat using Rayne's arm-mounted blades to cut and slice enemies much like the Devil May Cry or God of War games. In addition to her blades, Rayne can also use her dragon pistols and has a harpoon to catch and throw enemies.

BloodRayne 2 adds environmental and combat-oriented acrobatic moves to Rayne's move list. In the environment, she can now climb pipes, jump back and forth between chain link fences, swing on and jump from poles, and grind along rails. In combat, Rayne can now dodge toward away, over, and around enemies while locked onto them.

As a Dhampir, a child of a human mother and vampire father, Rayne is able to feed on her enemies to restore her health. This also provides her with the ability to remain in sunlight while taking only minimal damage.

Rayne also has a three-tier set of other special powers. They are an attack/defense upgrade tier, a passive power tier, and a time-related tier. Each tier has three special powers that are acquired throughout the game. 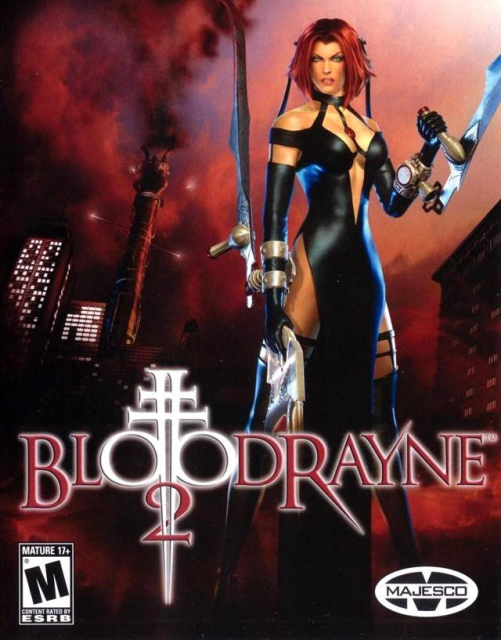