Rolling Thunder 3 is a sci-fi espionage-themed side-scrolling platformer-shooter developed by Namco (along with NOWPRO) and published by Namco for the Sega Genesis exclusively in North America on May 19, 1993.

A console-only sequel to the 1991 game Rolling Thunder 2, Rolling Thunder 3 is set in the same time period and stars "Rolling Thunder" secret agent "Jay" as he hunts down the GELDRA terrorist organization's second-in-command "Dread".

While the game removes the game timer and two-player multiplayer, it adds a revamped special weapon system and new vehicle sequences (one in a motorcycle and one in a personal watercraft). The game now uses a third button to fire Jay's special weapon which, like the Genesis version of Rolling Thunder 2, can switch based on the door entered. There are 9 special weapons in total, with the game switching to a close-ranged dagger once Jay runs out of ammo for that weapon, and players can choose a weapon to start each stage with.

Unlike the other two games in the series, Rolling Thunder 3 only received a limited North America release and was only included in one compilation: the Namco Museum Mini Player handheld console. 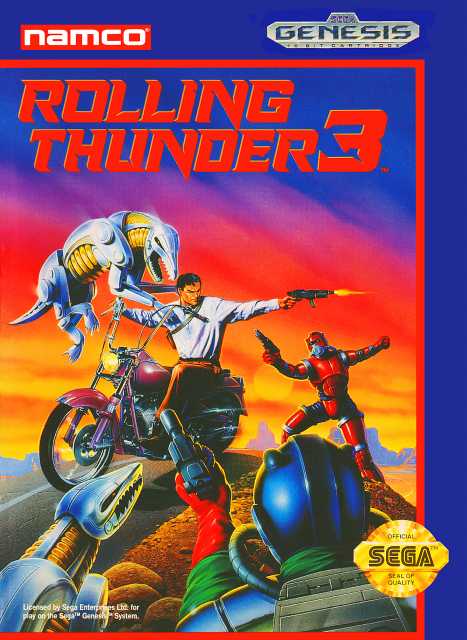