Set in an alternate 1940s, Enigma: Rising Tide is a simulator that solely focuses on naval combat.

Enigma is a naval simulation that is set in an alternate 1930s where Germany rules much of Western Europe and the British Government is exiled to Hong Kong. Players are able to command various types of ships ranging from submarines, battleships, destroyers, sub-hunters and even torpedo boats along the dangerous waters of the Pacific and Atlantic.

In 1915, the British ocean liner Lusitania successfully steams into its destination of Liverpool, England without encountering any enemy vessels. Thus no American citizens on board the liner are lost, and consequently this means the United States does not enter the Great War and seals the fate of British and French forces battling the German Army in Europe.

As Germany occupies France and Britain, Winston Churchill escapes and the British Goverment is now based in Hong Kong, allied with the Japanese as part of the League of Free Nations or LFN. The LFN's primary objective is to take back Britain from the Germans, who are now expanding their empire and building more sophisticated battleships while the U.S. holds steady and continues constructing carriers, battleships and destroyers to fend off the Germans threatening to invade.

Four years after the release of Rising Tide, Tesseraction announced they were in development of a sequel to Enigma and were also making an addon for the original game, however their owner (Resurgent Interactive) failed late in 2008 and at the end of the year Tesseraction shut down with the two planned Enigma games never released.
Fighting Steel: World War II Surface Combat 1939-1942 Destroyer Command Silent Hunter II Silent Hunter Battlestations: Pacific Battlestations: Midway Dangerous Waters 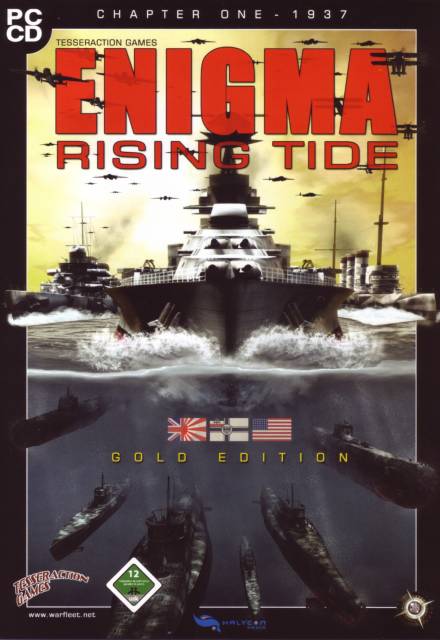