The first in Seibu Kaihatsu's signature shoot-'em-up series, Raiden puts players in the role in the titular spacecraft "Raiden" as they battle an alien invasion, 100 years into the future.

Raiden is a sci-fi vertical-scrolling shoot-'em-up developed and released by Seibu Kaihatsu (along with Tecmo in the Japan release and Fabtek in the North America release) for arcades in 1990.

The first in a series of shoot-'em-ups by Seibu Kaihatsu and loosely based on the 1987 Toaplan game Twin Cobra, Raiden puts players in control of one of two futuristic fighter-bombers "Raiden" as they fend off an alien invasion in futuristic 2090.

The game received numerous home conversions in 1991-1994, many of which have their own differences and additions. Some of them were released under different names, such as Raiden Trad / Raiden Densetsu and Super Raiden. It was also bundled with the sequel in the 1995 PS1 compilation The Raiden Project, with a later solo budget release in 2002 as part of Hamster's Arcade Hits series. It was also included in the 2013 compilation Raiden Legacy and was digitally released on July 1, 2021 for the PlayStation 4 and Nintendo Switch as part of Hamster's Arcade Archives series.

Raiden was originally released to the Arcades. It later saw a multitude of home conversions, with different degrees of fidelity to the source material. Many of these home versions became Raiden Trad (JP: Raiden Densetsu), a slightly modified version available for the Super Nintendo, Sega Genesis and FM Towns Marty. Raiden for TurboGrafx-16 was one of the first straight ports, though is thought to be somewhat underwhelming due to the system's lack of power. An enhanced version for the TurboGrafx-CD, named Super Raiden, adds redbook audio and two new stages but doesn't address the technical shortcomings. Raiden also became available for Atari consoles the Lynx and the Jaguar, as well as for PC MS-DOS. Raiden was released along with Raiden II in The Raiden Project compilation for Sony PlayStation, a near-perfect conversion of the first two Arcade titles. Finally, the original Raiden was added to the Japanese PSN store for digital download.

Like similar games from the era, Raiden is all about dodging enemy fire and powering up the ship. Players begin with a basic Vulcan attack and weak power, but can increase the strength of the weapon by collecting powerups dropped by certain ships. The two weapons in the game are the Red Vulcan and the Blue Laser, both of which can be powered up to eight times. The Vulcan has excellent range when fully upgraded, working as a spread cannon, while the Laser is a concentrated beam of destruction and can destroy enemies and bosses much quicker than the Vulcan. Other upgrades include two missile variants, Yellow "Dumbfire" Nuclear Missiles that do significant damage, Green Homing Missiles that can clear the field of smaller enemies, and bombs that can do immense damage on an opponent and eliminate enemy fire.

The game consists of eight levels and upon completion of the eighth level, the player is given one million points. They are then sent back to the beginning with whatever armament the ship ended the game with, and start the game over from the beginning. Enemies however are much faster and more aggressive than the previous time and as a result, the game can be played indefinitely. 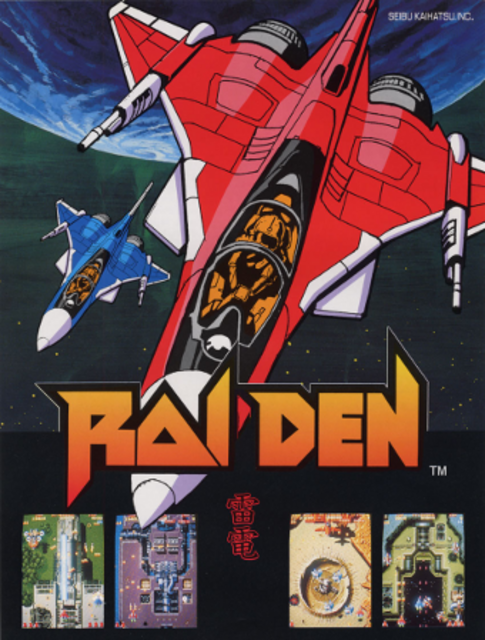