A side-scrolling action/platformer/shooter for the NES, featuring a witch named Francesca. Released first in Japan under the name Magical Kids Doropie, on December 14th 1990.

The Krion Conquest (JP: Magical Kids Doropie) is an action game for the NES which was developed and published by Vic Tokai.

It has more than a resemblance to Capcom's Mega Man series, which was its chief inspiration. One major difference is that Francesca begins with a full range of spells, each of which has a different attack pattern (and occasionally practical applications, like a flying broom) similar to the abilities Mega Man earns from defeating the Robot Masters.

The games takes place in the year 1999, when an empire known as the Krion Empire attacks Earth with a battalion full of robots. The Empire demands the submission of the citizens, and although they refuse, the citizens find that they cannot defeat the robots. To save the day, a witch named Francesca appears, and fights the empire to save Earth using magic.

The main difference between the Krion Conquest and Doropie is the removal of the majority of the cutscenes and storyline; in addition, as mentioned above, continues have been stripped from the game. Most of the character's names have been changed as well. In the intro, the ninja Kagemaru inadvertently frees Doropie from a magic staff, and she proceeds to help save the world from the evil Akudama Teikoku (悪玉帝国/"The Empire of Bad Character").

The gameplay takes a lot from the Mega Man franchise, including graphic styling and control. The controls are the same as in the Mega Man games with few changes: Shoot, jump, run, and switch weapons. However, unlike Mega Man, Francesca/Doropie begins with all the weapons right away, and she can fire in several directions. Francesca/Doropie can also crouch. However, despite the large number of similarities, there are a number of control differences that separate this game from Mega Man. Jumping while standing on a broom is best avoided, as the broom will vanish. Also different from Mega Man is the lack of selectable stages. The game features the ability to charge Doropie's basic shot from the get-go; while Mega Man 2 had the ability to charge some weapons (notably Heat Man's) the Mega Man series would not incorporate this as a primary game mechanic until Mega Man 4.

The Krion Conquest has no continues, but its equivalent Magical Kids Doropie does.

Doropie begins the game with all spells at her disposal.

There are several items for Doropie to pick up and utilize.

Francesca/Doropie: The heroine. She has been asleep in a magic wand for a long time, but thanks to Kagemaru she smells the evil of the Akudama Empire and awakens!

Kagemaru: A generic ninja character who inadvertently frees Doropie from her long sleep and then befriends her.

The Machine Paradise God Empress: With a mouthful of a name (Gokuraku Kishintei/極楽機神帝) She's the primary antagonist. She's actually the spirit of an evil witch Doropie defeated a long time ago, sealed in a mechanical body.

Each stage is separated into multiple acts. 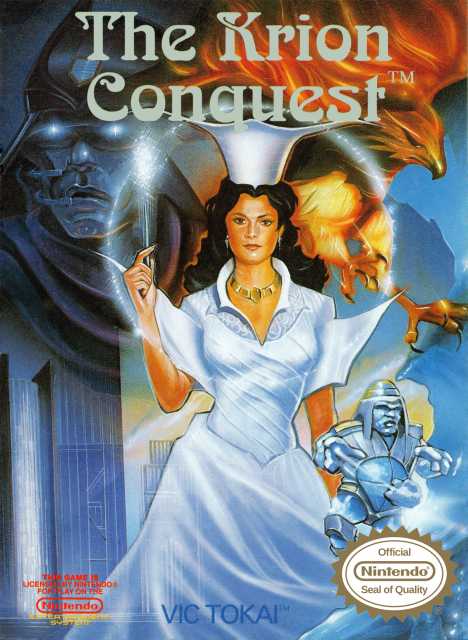