A two-on-two arcade basketball game by Midway, known for its exaggerated rules-light take on the sport and its official use of NBA teams and players. Boomshakalaka!

NBA Jam is a belt-scrolling basketball game developed and released by Midway for arcades in February 1993.

Based on the studio's earlier 1989 game Arch Rivals, NBA Jam features a rules-light, arcade-style, two-on-two variation on the sport of basketball. It is one of the earliest games to feature licensed teams and players from the National Basketball Association (in its 1992-93 season), and includes realistic graphics with each players' digitized likenesses. It also features four-player simultaneous multiplayer, a system for keeping stats and persistent progress, voice commentary by Tim Kitzrow, and hidden cheat codes (including the famous "Big Head Mode").

Along with removing most of the sport's rules, including most of its numerous fouls and violations, NBA Jam exaggerates realism with extremely-high and stylish slam dunks, turbocharged movement, and the series' signature "On Fire" system (where repeated consecutive baskets causes the player to gain an overall buff). Its over-the-top nature would later be used by Midway for other sport games, including American football (with NFL Blitz) and ice hockey (with NHL Open Ice).

The game received home console ports through 1994 for the Super Nintendo Entertainment System, Sega Genesis, Sega CD, Game Boy, and Game Gear, most of which were published by Acclaim (the North American and European GG version published by Arena). Most were ported by Iguana Entertainment, with the GB version ported by Beam Software. These versions include an updated roster (from the 1993-94 NBA season) and unique hidden characters (notably including U.S. president Bill Clinton).

The game's success led Midway to release an updated sequel in 1995, known as NBA Jam: Tournament Edition. While Acclaim would continue to use the name NBA Jam for multiple games, due to licensing issues Midway instead produced multiple spiritual successors to the series, including NBA Hangtime, NBA Showtime, and NBA Hoopz.

NBA Jam is a 2-on-2 arcade-style basketball game that features over-the-top gameplay. The exaggerated nature of the gameplay means that players can perform gravity defying dunks with ease and shove opposing players down without penalty. Each game consists of four 3 minute long quarters, and the team with the most points at the end of the fourth quarter wins the game. When starting a match players have the option to enter their initials in order to keep track of their win-loss record and teams that they have beaten.

The only fouls a player can commit in NBA Jam are goal tending and shot clock violations. This means that the player can shove opposing players (and even his own teammate) down in order to get the ball without commiting a foul. A shot clock is present in order to keep the game moving at a fast pace and goal tending is used to prevent players from hoarding the basket while on defense.

A trademark of the NBA Jam series is the ability for players to catch on fire. This occurs when a player makes three consecutive unanswered shots. While on fire the player is nearly unstoppable; the player is granted unlimited turbo, increased accuracy, and can't be called for goal tending. A player's fire goes out when the opposing team makes a basket.

The original arcade version of the game features all 27 teams from the 1992-93 NBA season, with two players from each team. Each player is categorized in four different stats: movement speed, ability to score Three Point shots, ability to dunk, and defensive power. Some players, such as Michael Jordan, could not appear in the game due to licensing issues.

Earlier console versions (SNES/GEN/GG) of the game update the roster for the 1993-94 NBA season, most of which are based on the arcade version of NBA Jam: Tournament Edition, while the later console versions (SCD/GB) update the roster for the 1994-95 NBA season. This includes switching some players between teams, replacing some players outright, and switching team colors and logos. Due to licensing issues, Shaquille O'Neal and Charles Barkley were removed from these home versions (although Barkley does appear in the first revision of the three earlier console versions, only to be removed in a re-release).

The game includes some hidden characters that are playable by inputting a specific initials and birthdate combination, which replaces the player's slot on any team they choose and shares that teammates' stats. These include members of the game's development team (Mark Turmell, Sal DiVita, Jamie Rivett, George Petro, John Carlton, John Newcomer, Jon Hey, Shawn Liptak, Sheridan Oursler, and Tony Goskie) and the motion-capture actors (Stephen Howard, Tony Scott, and Willie "Air" Morris, Jr., all of whom appear in the attract mode's "Starring" segment). 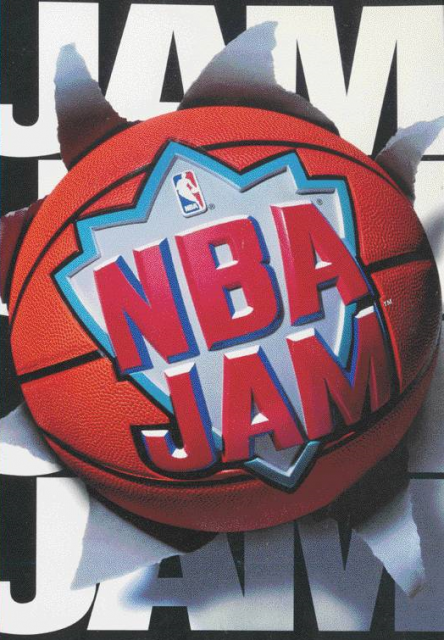