The third installment of the Mega Man X franchise has both Mega Man X and the rebuilt Zero (playable for the first time) hunting down the Maverick scientist Dr. Doppler, who has congregated the reformed Mavericks for a more sinister purpose.

Mega Man X3 (known in Japan as Rockman X3) is a side-scrolling action platformer developed and published by Capcom for the Super Nintendo Entertainment System on January 1996.

The third game in the Mega Man X series (and the sequel to the Mega Man X2), players control android Mega Man X and, for the first time, his Reploid ally Zero (who can be called in to deal with tough situations thanks to his energy sword). It is the last game in the franchise to feature the original art and gameplay style of Mega Man X (as well as the password system).

Set sometime after the events of Mega Man X2 (where X and the rebuilt Zero defeat the Maverick Sigma for the second time), the Maverick rebellion becomes neutralized due to the technology of Reploid scientist Dr. Doppler. Reformed Mavericks form an utopia near the scientist (named Dopple Town) and lived peacefully before they suddenly go berserk and cause mayhem. Believing Doppler to be responsible, X and Zero must defeat the eight Maverick leaders of Dopple Town and foil the mad scientist's plans (while surviving his henchmen, Bit and Byte, and a mysterious Maverick).

An enhanced version of the game was released for the Sega Saturn and PlayStation in Japan (on April 26, 1996) and Europe (published by Virgin Interactive on March 1997). While the core game remains the same, it includes animated full-motion video cutscenes, a rearranged soundtrack, and new sound effects. This version was later released for the PC in Japan (on March 28, 1997) and North America (on October 5, 1998) and is included in the Mega Man X Collection compilation for the PlayStation 2 and GameCube (released on January 10, 2006). Mega Man X3 was re-released again as part of the Mega Man X Legacy Collection.

The gameplay has only somewhat differed from Mega Man X2 by making the wall jumping slightly easier to preform while reploids become tougher. The gameplay compared to the Mega Man series is much more fast paced with more tricky and more powerful mavericks than ever giving rise to more difficult battles. As a side point, their battles can be completed faster than other bosses in previous games, as they are more susceptible to their weakness, and take more damage from their attacks.

At the end of every level X must fight a boss to proceed, and after fighting all 8 bosses he goes to the final fight against Doppler and his army. Here is a list of the boss robots in order to exploit all of their weaknesses.

Dr. Light has once again hidden some secret capsules that will enhance Mega Man X's abilities. When Mega Man X steps into one of these capsules, it will come to life and change the appearance of Mega Man X. Here are descriptions of some of the Capsules:

Gives X the ability to dash again while in the air

A map will appear at the beginning of the level to show X where hidden items are located.

Automatically creates a defense shield on Mega Man X's chassis that reduces damage by 50%. After getting hurt a shield will automatically form around X to lessen damage by 1/2

In addition to the armor capsules, Dr. Light has set out 4 different armors known as robot ride armor. Mega Man X and Zero must find these 4 armors, each with different capabilities and functions. The armor looks like a giant robot that they can activate by jumping into it. Once X finds an armor, he may use the armor in any stage where he may find the Robot Ride platforms.

If X has found an armor, the platform will activate. A menu will appear just to the left of the platform, so use the game pad or the arrow keys to select which armor X would like to use. While in the robot ride armor, Mega Man X and Zero will not be damaged. The armor can be damaged, but can be healed by returning to the platform. If the armor is destroyed, X cannot use it again until he enters a new stage. He can also jump out if need be by jumping while holding up on the D-pad. 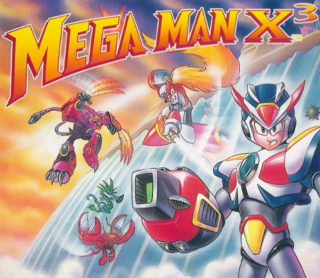