Radiant Silvergun is a vertical scrolling shooter with several weapons and a color-based chain system.

Radiant Silvergun is a 3D shoot-em-up developed by Treasure and released in Arcades and for the Sega Saturn in 1998. While only released in Japan, all menus are in English making it accessible to international players. The game's limited release and cult following has made it a rare and highly sought after game, and players can expect to pay up to hundreds of dollars for an original copy. An Xbox Live Arcade version was announced at Tokyo Game Show 2010 at Microsoft's Press Keynote and was released on September 14, 2011.

Radiant Silvergun is a vertically scrolling shooter playable either solo or with two-players. The player may select the order of select stages. In the arcade mode, there is a short tutorial that allows the player to practice using the controls for each. As in most shooters, extra lives are given at certain point levels. It is often said that Radiant Silvergun is the spiritual predecessor to Ikaruga.

On the Saturn, there are five difficulty levels (from very easy to very hard), and configuarable controls. The graphics are rendered in 3-D, but the screen is stationary and maintains the feel of a 2-D scroller.

There are six different firing modes plus the ability to use a melee sword. Each of the firing modes can be upgraded in a kind of leveling-up system. By getting more kills and higher combos achieved with a weapon, you can level it up to deal more damage, have a wider spread, shoot faster, or target more enemies.

Consecutive hits of similarly colored enemies count up as a chain system and become a multiplier for points in the same way that a combo system in a fighter works. This is similar to Ikaruga in the sense that it will cause the player to selectively defeat some or most of the same color before shooting the rest, or possibly ignoring them altogether. But there is no need for the ship to switch colors since all firing modes work on all colored enemies.

The 'Ikaruga Chain Mode' is a chaining system introduced in the Xbox Live Arcade Version. It works in the same fashion as the chain system in Ikaruga, where destroying three enemies of the same color will increase the chain and the points scored. An example would be three red enemies, three blue enemies and three yellow enemies will work in the same way that six blue enemies, nine yellow enemies and three red enemies would. This allows you to chain enemies in a way that wouldn't normally work in the original chain system. This chain system caps at a lower point value than the original chain system (due to being able to switch between colors without breaking your chain) and also disables all technique-based secret bonuses. The 'Ikaruga Chain Mode' option is only available if you have one achievement in the Xbox Live Arcade version of Ikaruga.

The Radiant Sword is a weapon that is used like a melee sword, which can be used to attack and to absorb most types of bullets. By collecting enough bullets, an energy bar fills up, and when full can be used to unleash a powerful melee attack that virtually takes up the entire screen. The player is invulnerable during this deployment.

There are a few bosses per stage and one ultimate boss fight.

The soundtrack to Radiant Silvergun was composed by renowned composer Hitoshi Sakimoto, known for his work on Vagrant Story and Final Fantasy XII. It was published by Toshiba EMI on August 7th 1998, containing the original score from the game as well as an enhanced orchestral arrangement. 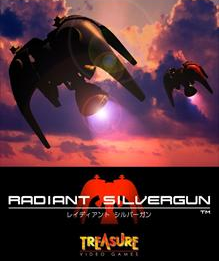