Vietcong is a tactical FPS shooter set during the Vietnam war.

Vietcong is an tactical FPS made by Czech developer Pterodon and published by Illusion Softworks in 2003. It is know for its realism focused gameplay and at the time, original Vietnam war setting. It was followed by an expansion pack, Fist Alpha, in 2004, and a full-on sequel, Vietcong 2, in 2005. The game featured many early examples of later genre conventions such as iron sights and a cover system.

In addition to the main story-driven campaign, the game also features a number of quick skirmish style missions for single player, as well as a fairly robust set of both cooperative and competitive multiplayer modes, including a downloadable set of coop missions entitled "Red Dawn" played from the perspective of Vietcong soldiers.

The game begins in 1967, early in the full involvement of US combat units in the Vietnam War. The player takes control of Sergeant First Class Steve Hawkins, a US Special Forces soldier recently transferred to Nui Pek Camp, a South Vietnamese base stationed close to the Cambodian border. Steve has spent his tour of duty as an instructor for South Vietnamese troops and he is eager to see some action. He is soon introduced to the men he will command during his assignment: South Vietnamese Special Forces (LLDP) guide Le Duy Nhut, medic Joe Crocker, demolitions specialist Thomas Bronson, radioman P.J. Defort, and machine gunner C.J. Hornster, During the course of the sizable single player campaign, Steve experiences a wide variety of combat situations iconic to the Vietnam conflict, ranging from basic patrols, to POW rescue attempts under cover of night, to frantic defense of strategically-important hilltop bases, all culminating in the inevitable last-ditch defense of the base camp itself.

To complete their missions, the player will traverse a broad cross-section of Vietnamese environments, including swamps, jungles, ancient runes, and even play the dreaded role of "tunnel rat" in the famous Vietcong underground tunnel networks, armed only with a pistol and a flashlight.

Nui Pek - the Base Camp

Between missions the player spends their time at base camp, where they receive briefings and intel on their upcoming missions. They may also visit the firing range and practice with weapons both issued and found in the field. The player can also visit their own private quarters, where they can check out Steve's thoughts on past and future missions in his journal or read up on subjects such as Vietcong tactics and Vietnamese history, all while a transistor radio plays 60s hits such as "Hey Joe" by Jimi Hendrix

Missions are often set in typical Vietnam scenarios such as swamps and jungles, and generally see the player with full control of their squad, who will follow basic squad commands such as "attack!" or "cover me!" and can also be called over individually to perform their individual duties. The AI in Vietcong is generally quite impressive for its time, and in many cases even today, as both the player's squad members and enemy Vietcong often respond quite realistically to combat situations in a way unfortunately rarely seen in first-person shooters. Enemy troops will both attempt to suppress and flank the player and his squad, and response to heavy fire in kind; as they are not granted preternatural knowledge of the player's location as in many FPSs, the player can execute maneuvers impossible in many shooters even today such as suppressing an enemy unit and then sneaking around behind them as they continue to fire on their last known position.

When traveling through the jungles of Vietnam, it is usually smart to send a pointman ahead to find safe paths and discover traps set by the Vietcong. When he discovers a trap, he will stop and give the player a chance to disarm it.

When the player takes damage, they may either apply first-aid kits to themselves or call in the squad medic to heal them a limited amount of times. However, each time they must do so, the player will have a little less total health for the length of that mission. The medic will also heal other squad members as necessary.

The rest of the squad have their own important roles. The demolitions expert/engineer carries extra ammo and essential explosives for certain mission objectves. The radioman is both essential as a link to HQ and also cam be used to call in a limited number of devastating artillery strikes during missions, and the machine-gunner is useful for suppressive fire.

Vietcong was one of the first commercial games to feature the use of iron sights on weapons, and quite possibly the very first to implement a first-person "cover system" of sorts; when crouched behind a piece of cover, the player would peek up over the cover upon going into aimed iron sights, allowing them to quickly and naturally pop off a few shots and get back down into safety. This use of cover is essential, as firefights are indeed deadly in Vietcong and it only takes a few shoots to kill the player, even at the lower difficulty levels. It is always important to think tactically and use real life tactics such as suppressive fire and flanking.

In some missions, the player must explore the narrow, claustrophobic tunnels of the Vietcong without the help of their squad. Due to the tight quarters, the player is forced to rely on their sidearms and a flashlight to light the way, and the maze-like tunnels can often to dead ends (often literally), making for a tense, if occasionally somewhat frustrating, experience.

Vietcong was a very popular online, supporting an active community for years after its release. The game shipped with several game types: 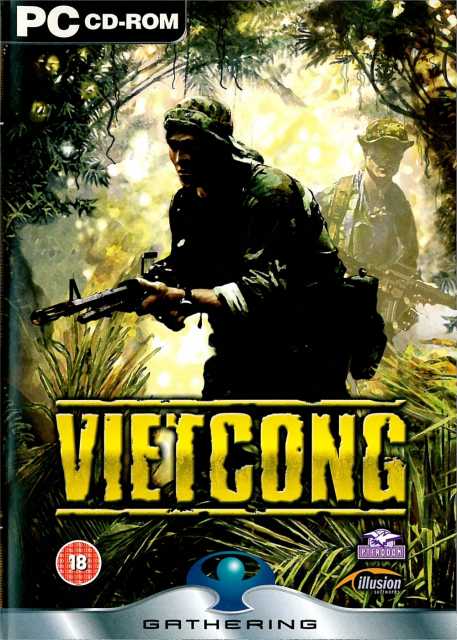