Crime is on the rise. More guns and drugs are appearing on the streets and the city is in crisis. SWAT is called in to take on a series of disturbances that eventually lead them to the root of the problem, an eastern European crime family that has taken up residence in the city. A final showdown will place legendary SWAT tactics up against the most dangerous and ruthless criminals yet: the Stetchkov syndicate. The Stetchkov Syndicate is putting big guns in the wrong hands. But now, you've got bigger guns in yours - along with upgraded equipment.


New missions
The Stetchkov Syndicate takes place in the same city as before, so the expansion maintains the urban look and feel of the original but with all new locations.

Here's the story behind the stand-alone missions following this expansion pack. In the preproduction stages of SWAT 4 Irrational Games talked to SWAT officers and learned that in their line of work each day on the job is different from the day before. The calls they get always require the same quick-thinking and tactical expertise, but rarely are they related to one another. Knowing this, the developer made a conscious decision to do the same thing in SWAT 4: create exciting missions that weren't necessarily tied to each other.

However, sometimes there is an event or series of events that over time has an increased affect on SWAT's workload. It may not appear that these events are connected right away, but put together a few clues and one might discover that there is a correlation. This is the route Irrational Games chose to go with on the expansion pack. Some missions may not have anything to do with crime family, but others have a direct link back to the dangerous Stechkovs.

There are about a dozen new weapons and tactical items. This time some of them are team specific. For starters, SWAT gets the Colt accurized rifle for sniping and a 40x46mm grenade launcher for taking out suspects with less-lethal rounds at a distance, while the suspects get the likes of a 5.56mm light machine gun. Irrational Games has taken time to carefully balance multiplayer so that you can play well-matched rounds with each side having different equipment, but they did put in an option that allows all of the weapons to be available to either team.

Included in the tactical gear are night-vision goggles, an ammo pouch that can be equipped to hold additional ammunition, lightsticks for marking cleared rooms, and a no-armor option in multiplayer that allows for faster character movement but obviously makes the player more vulnerable.

New to the expansion pack is weapon and equipment progression. In other words, you don't get all of these weapons and gadgets at once. Now, you have to put a little time in and earn them. Each new mission comes with a new weapon or gadget that is best suited for the trouble ahead. Once you have that weapon it is yours to keep. You can equip it and take it into any of the new missions or even go back and replay the previous levels from the expansion pack or the original game.

Smash-and-grab is kind of a variation on SWAT 4's popular VIP mode. The primary objective of the suspects is to grab a suitcase that will spawn in a random location within the level. They must carry it to an exit point within an allotted amount of time. The player carrying the briefcase will not be allowed to utilize primary weapons and will be forced to move no faster than the walk speed. The rest of the suspects must cover him and make sure that he gets to the exit point.

The primary objective of the SWAT officers, of course, is to prevent the suspects from getting the suitcase to the exit point. While it is possible to stop the suspects with the briefcase by killing them, it is more advantageous to arrest them. Not only will it humiliate the suspects, but each arrest will take 30 seconds off the time remaining.

Expanded possibilities for Co-op play
The original SWAT 4 gave players the opportunity to play in five-man co-op missions. Ten players in co-op really is twice the fun. In Stetchkov you can decide to split the team into two groups of five and enter at different entry points, or you can take all ten through the front door.

The expansion is regarded by the developer as a slightly tougher game than the original mainly because of its more hardened criminal representatives. With Stetchkov's new gadgets and missions added to those already found in SWAT 4, it provides plenty of ways to go about solving a scenario.


Understanding the game
SWAT is a life-preserving organization, and the game definitely reflects that. The goal is to defuse the situation, and not further escalate it to a point where people are dying left and right.

SWAT is not your common run-and-gun first-person shooter.

It adds the depth of objectives, be it to save a VIP from being executed in a barricaded house or defuse a series of bombs scattered around a location within a given time set by terrorists, to the ever-present task of keeping civilians and your team from being harmed. In addition to that you're required to give the suspects a chance of giving up and to lay down their weapons. Reflect on the fact that most criminals go by no such codes of conduct in the way they think and behave.

You'll likely face criminals faking a surrender in order to let you think you've secured him (or her), and as you approach him with the zip-cuffs equipped instead of your weapon, he'll draw a second gun, or pick up the one he dropped on the ground to take a shot at you. He might start lowering his pistol or rifle slowly, but change his mind to either run or take a shot at you. These are both realistic scenarios that could occur in real life. As SWAT, you'll have to yell to identify yourselves as a police unit, aim at the suspect, and observe the reaction.

A suspect might start shooting right away, in which case you'll have to decide how to take him down. If you stand directly in-front of a wooden door when opening it, then you might experience that the suspect starts firing at the door, effectively hitting you. That's when you've got to start looking at the movement tactics you apply when approaching a door as well as take look at the various equipment carried by the members of your team. Some teams opt to apply gas or flash bangs at every point of entry, but for larger buildings, grenades might be in short supply during a mission and must be used sparingly.

In a scenario where time is not of the essence walking slow, covering all angles, while applying a mirror under every door and around most corners will give you added security and valuable information on whether the room ahead requires the use of a distraction such as a flash grenade. Note that a flash grenade does not hinder someone forever, and you need to be all over the suspects within seconds. Identify yourself by yelling, if that isn't enough, hit them once or multiple times if they do not comply, if that isn't enough, taze them - and sometimes you might encounter someone that does not want give up at any circumstance, no matter what non-lethal means you apply, which in this game means you'll have to use live ammo to neutralize the threat this poses to you, your team and civilians.


Adding to the fun
A popular way of adding to the level of difficulty while playing cooperatively in this game's Main mode missions (the missions driving the Main Story and progression of the game) as well as those of the original SWAT 4, is to not include any non-lethal weaponry, but still manage to arrest (read: not kill) any of the suspects nor let a SWAT officer get injured in the process. The de-briefing post-mission screen lets the players know how they did as a team, and there are several elements factoring in, which results in a final score ranging from 0 to 100. 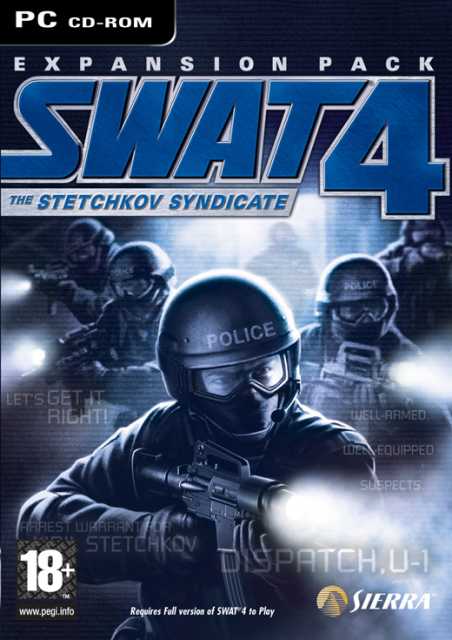