Sniper Elite is a third person action game set against the backdrop of a nearly completed destroyed 1945 Berlin. As a disguised agent, your sniper rifle is your weapon of choice.
PlayStation 2

The story takes place in 1945 where Karl Fairburne is a US OSS (Office of Strategic Services) agent sent to the Battle of Berlin disguised as a German sniper. His Mission: Obtain secret documents about German nuclear technology before the Soviets get their hands on it.

Offering a unique blend of third and first person tactical action with stealth. While all movement is made in third person (to include weapon switching), you switch to first person for all sniper shots. The stealth aspect is reinforced by a camouflage feature. As you navigate the terrain in Sniper Elite, you are given a percentage of how well you are camouflaged.

Sniper Elite is a cross between simulation and arcade gameplay:

Simulation - The game offers many difficulty modes of play. Most of which include options you can toggle on and off: gravity (bullet drop), wind strength, lung capacity, and overall AI strength. While it is arcade-like to be able to toggle these, the more options turned on, the more realistic this game is.

Arcade - Uses the Gamespy account service (similarly seen in recent games like Borderlands) to track and record your score. The score is based on the number of times you save, the type of killshots you make, and time to complete the level. An overview of the statistics of the previous level are presented at each level's completion.

One of the selling features of the game is including a slow-motion sniper cam. If you make a shot over 50m, the camera will fixate on the bullet leaving your gun and follow the trajectory in slow motion to it's intended target. Once it reaches that target, you get to see the gruesome results of your shot and are given a rating based on that shot that adds to your overall level score.

Karl Fairburne - The protagonist and only character you play as. Not much is known about his background.

The PC version of Sniper Elite is available on Steam for $9.99 USD 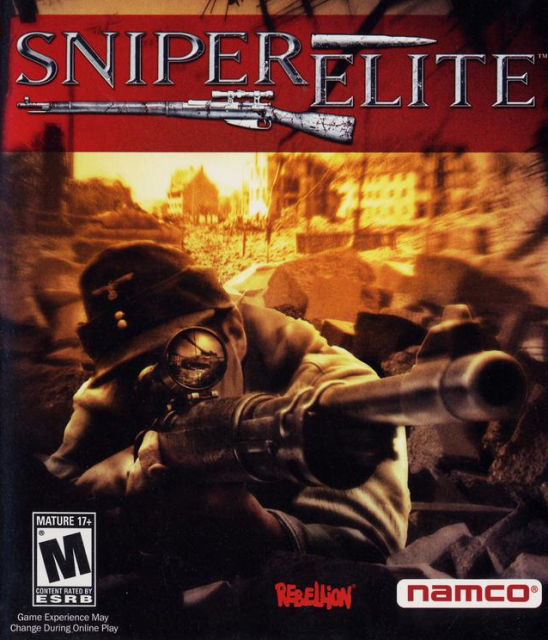