Ace Combat Zero: The Belkan War is an arcade flight game that chronicles the events 15 years prior to the Circum-Pacific war explored in Ace Combat 5: The Unsung War. The player takes the role of the mercenary Cipher fighting to curb Belkan aggression and restore peace to the continent
PlayStation 2

Ace Combat Zero: The Belkan War was released on April 25, 2006. It was preceded by both Ace Combat 5: The Unsung War, and Ace Combat 4: Shattered Skies, and is a prequel to the events of Ace Combat 5. It was released at a forty dollar price point in the united states, as it was a more niche and smaller title than its predecessor Ace Combat 5, for the simple reason that it was no longer on the most relevant console generation.

In the year 1995 Belka invades its neighbors, beginning The Belkan War. Ustio's small air force is outnumbered and resorts to hiring mercenary pilots to fly its aircraft. The player takes on the role of Cipher, an enigmatic mercenary pilot, who flies with his wingman Pixy. The story is told through a journalist, Brett Thompson, as he tries to uncover the fate of Cipher and the effects of The Belkan War. The story is presented in a documentary style interviews with former Belkan aces. As the war swings towards the favor of Ustio and her numerous allies, the Belkans detonate seven nuclear weapons along the front lines, sealing themselves behind a barrier of fallout (an analogue to a Douglas MacArthur plan envisioned during the Korean War). In subsequent chaos, Pixy deserts his squadron and joins the paramilitary organization "A World With No Boundaries". The newly formed civilian government of Belka signs a peace treaty with of Osea, Sapin, Yuktobania, and Ustio. However, a radical paramilitary organization, comprised of disillusioned soldiers from Belka, Sapin, Osea, and Yuktobania emerges from the fallout after the blasts. Calling themselves "A World With No Boundaries", they attempt to end all wars with a massive nuclear attack on the entire world, utilizing a Belkan wonder weapon codenamed V2. Cipher and his replacement wingman, P.J., are sent to attack a massive hydroelectric dam in Belka housing the V2 project. On the battlefield, Cipher meets with his former wingman Pixy, who flies a prototype aircraft with a tactical laser fitted to its fuselage and direct control of the V2 weapon built into its computers. Cipher shoots down Pixy in a head on pass and puts an end to “A World With No Boundaries”.

A new feature to the gameplay is the Ace Style System. If you shoot down unarmed vehicles and planes you are a Mercenary Ace. If you let them leave the battlefield alive, then you are a Knight Ace. If you hit a middle ground between the two you become a Soldier Ace. The Ace Style System affects many things in the campaign most notably the ace pilots you face as well as the subsequent interviews that Brett Thompson explores. The player will need to play the campaign three times to see all the interviews. Other things affected by the Ace Style include the planes unlocked. Players going for Mercenary Ace earn more money and have access to good planes but the aces they face are much tougher. On the opposite spectrum, players going Knight Style earn less money and the planes accessible are not as good. They face the least aggressive aces however.

Ace Combat Zero features 36 playable aircraft with 3 of them being fictional. 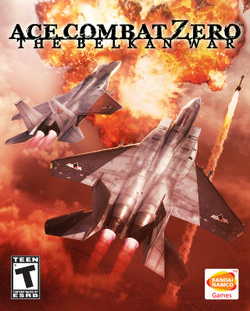