Sixth installment of the Metal Slug franchise and the first to leave the Neo-Geo hardware. Introduces two new characters from the Ikari Warriors/King of Fighters franchises.
PlayStation 2

Released in 2006, Metal Slug 6 was developed for the Sammy Atomiswave arcade platform and was later ported to the PlayStation 2. The console version was never released outside of Japan, but a direct port of the arcade version can also be found on Metal Slug Anthology for the PS2, PSP and Nintendo Wii.

The game once again features the Rebel-Martian alliance as seen in previous games. This time around, the history is much deeper than previous installations; players must join forces with both the Martians and the Rebel forces as a much bigger threat appear.

Metal Slug 6 introduces two new characters: Ralf Jones and Clark Steel. The Ikari Warriors, along with the four Metal Slug regulars, each have unique abilities that players can take advantage of:

MS6 also introduces the ability to hold two weapons; additionally, players can switch back to the handgun in order to preserve ammo. All stored weapons are still lost upon death.

Players can now choose from two different difficulty levels from the start; Easy and Hard. Easy lowers the game difficulty and gives the player a Heavy Machine Gun when starting a new life, but ends the game before the final mission. The game also introduces new Slugs like the Donkey Slug. 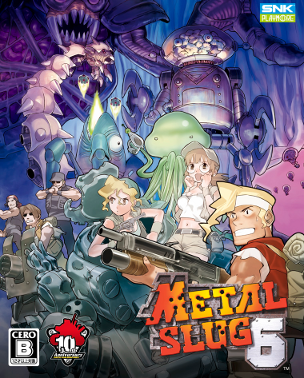