Ninja Gaiden Sigma is an enhanced port of the action / adventure game Ninja Gaiden which was originally released on the Xbox in 2004. It is known for its incredibly fluid animations, deep fighting system, and intense difficulty as players guide protagonist Ryu Hayabusa through sixteen chapters worth of brutal combat, environmental exploration, and puzzle solving. Sigma represents the second re-release of Team Ninja's original Xbox game, and the first appearance of the modern franchise on a non-Microsoft system.

A free demo of Sigma is available for download through the PlayStation Network. It includes the entire first level of the game, two higher difficulty levels which can be unlocked by defeating the end boss, and allows access to weapons which would not normally be available at that early stage of the game so players can experience some of the different fighting styles.

Despite receiving positive reviews from the press and public, Tomonobu Itagaki, the director of Ninja Gaiden and Ninja Gaiden Black, dislikes the PlayStation 3 port stating that "it's no good". He strongly believes that the game should always be an Xbox exclusive game and that Sigma adds nothing new to the series.

"All you need to do is play Ninja Gaiden II and then try and play Sigma afterwards and you'll see why. Despite the fact that it's on a 'next-generation' console there's no evolution whatsoever. That was made not by me, but one of my sub-ordinates who basically tried to copy the success of Ninja Gaiden."
- Tomonobu Itagaki

Played from a third-person perspective, Ninja Gaiden specializes in fast, visceral 3D combat against multiple opponents including black ninjas wielding explosive throwing stars, armored soldiers with submachine guns and electrified blades, huge dinosaur-like demons which can breathe fire, and many more. These foes are highly aggressive -- unlike many similar games, they will not hesitate to coordinate their attacks to strike from multiple directions at once, executing continuous combos or devastating grapple moves to exploit any opening in the player's defenses. Every enemy in the game is fast, strong, and capable of dealing out lethal amounts of damage to send the player back to the previous save point.

Fortunately, the player-controlled Ryu Hayabusa has a variety of upgradeable weapons at his disposal, superhuman agility which allows him roll safely away from enemy attacks and run several steps straight up most vertical surfaces, and the ability to cast a few different "ninpo" spells which can inflict heavy damage on one or more nearby foes. Fallen enemies also give off yellow essence which can be exchanged at shops for healing items, blue essence to heal up Ryu's wounds, and red essence to recharge his ninpo, and in the thick of battle, nearby essence can be absorbed to unleash immensely powerful "Ultimate Techniques" capable of slaying multiple enemies at a time.

Combat can take place at virtually any point in the game, but between battles, players explore each level to find hidden items and solve puzzles to proceed to the next area. There are many variations on the theme of finding a key to pass through a particular locked door, as well as environmental puzzles where Ryu must use his wall-running ability or ledge-shimmying skills to avoid damage and gain access to a hard-to-reach place. In addition to free hidden healing items, most levels also include Golden Scarab jewels which can be exchanged at shops for unique items which cannot be obtained any other way.

Weapons in the game include the Dragon Sword, a single katana considered the most balanced weapon in the game, nunchucks which sacrifice range for a greater attack speed, a quarterstaff which can easily hit multiple surrounding enemies with every swing, and a couple super-heavy weapons like the Dabilahro great sword which are ideal for dishing out heavy damage against some of the slower, more heavily armored opponents. Each weapon can be improved at shops in the game to unlock new and more powerful combos.

While visiting Murai, the leader of another ninja clan, Ryu receives word from Ayane that his family's village has been brutally attacked. He battles his way to the village shrine, but when his desperate attempt fails to stop the fiend Doku from stealing the cursed Dark Dragon Blade, Ryu sets out on a mission of vengeance against the demonic forces of Vigoor who plan to use the blade to amass unstoppable power and wreak havoc throughout the world.

In his journey, Ryu meets Rachel, a voluptuous buxom fiend hunter who is on a mission to hunt down all fiends, in particularly Doku, and to rescue her twin sister Alma, who unfortunately is under the influence of the Greater Fiends. The two allies meet up occasionally but never fight alongside with each other.

Some of the locales in the game include a traditional Japanese village, a futuristic airship, a modern military base, and ancient catacombs stretching deep beneath the evil Vigoor capital, evoking an anachronistic world similar to developer Team Ninja's Dead or Alive fighting game franchise. Enemy types vary in each level, and most chapters end with a particularly challenging boss encounter appropriate to the setting.

Ninja Gaiden Sigma includes all the content from the original Xbox version of Ninja Gaiden as well as the additional features and unlockable Mission Mode introduced in the free "Hurricane Packs" on that system. Moreover, it included several new enhancements over its predecessors including:

Conversely, Sigma has fewer unlockable costumes and is missing a brief introductory movie which was added to the previous remake, Ninja Gaiden Black.

Ninja Gaiden Sigma has some downloadable content as well. These are in the form of three different survival modes. Weapons Master, Speed Master, and Rachel Master.

In Weapons Master you take control of Ryu Hayabusa and have to fight your way through waves and waves of foes. But in this mode each stage has a specified weapon you have to use and no other. During the battle bosses will also show up to give you a hard time. Since this mode goes until you die, if you manage to live long enough, the waves and bosses will start to repeat and it eventually comes down to your skill to determine how long you cans survive. Your best scores will go up on an online learderboard.

In Speed Master you are once again in the shoes of Ryu Hayabusa. But unlike Weapons Master this mode is about defeating enemies as fast as you can rather than how many. Also you have all of your weapons and Ninpo to choose from. This mode has five different stages and your best times on each will be posted in an online leaderboard.

In Rachel Master you are now controller the fiend hunter Rachel. This mode plays exactly like Weapons Master in that you have to kill as many enemies as you can before you die. But since Rachel only has one weapon each stage is just another venue to fight in with different monsters. This mode has five different stages. In this mode your score will also go on a online leaderboard.

On December 8th, 2011, Team Ninja made an announcement that Ninja Gaiden Sigma will be ported to the upcoming PlayStation Vita dubbed Ninja Gaiden Sigma Plus. It features new enhancements made exclusive for the Vita like touchscreen and gyro sensor functionality. It was released on February 22nd, 2012.

Several improvements and enhancements include: 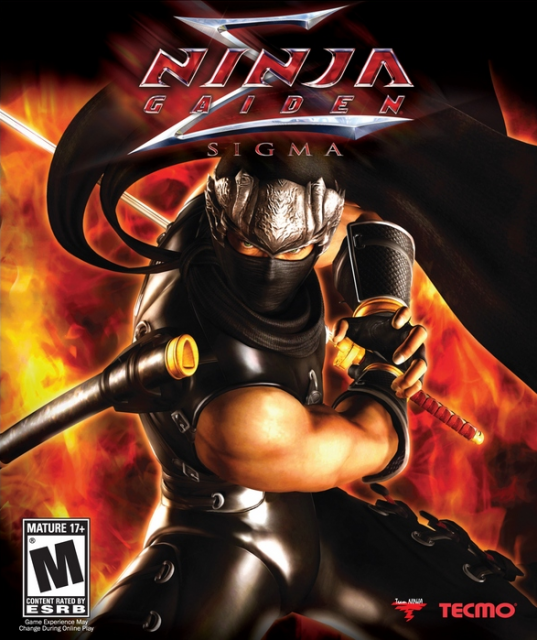