Use a deadly boomerang to fight through six sectors and recover the Master Computer in this NES action platformer.

Power Blade was released in March of 1991 in North America and on January 23, 1992 in Europe. The game is a reworking of the Japanese game Power Blazer, which was released in April of 1990. Differences between the two games include changes to character design, improved controls, and a complete overhaul of the levels.

Power Blade is a two-dimensional platformer with design elements that will be instantly familiar to any Mega Man fan. Players can choose freely from six available sectors from a stage select screen, and tackle them in any order that they wish. The levels themselves also feel very much like those in the Mega Man series, although with more exploration. The objective of every sector is to find the agent who can give NOVA access to the sector's security room for a boss fight. After defeating the boss, NOVA is able to access the database and recover a data tape. Once six data tapes have been collected, access is granted to enter the Master Computer's control room. There, the player must defeat the alien overlord and restore the Master Computer.

The player's weapon in Power Blade is essentially a very deadly boomerang that can be launched in eight directions. Players get access to more powerful and longer ranged blades from finding power ups. Because the projectile returns to the player, there is no ammo. Normally, only one boomerang can be thrown at a time, but power-ups will allow a second and third boomerang to be in the air at once. There is a limit on the distance the boomerangs can be thrown, displayed by a meter at the bottom of the screen which quickly builds when not attacking. The maximum length of the meter can be increased by collecting a star power-up.

Additionally, every level contains a temporary power suit which gives the player a metal armor that fires projectiles through walls and with unlimited range. 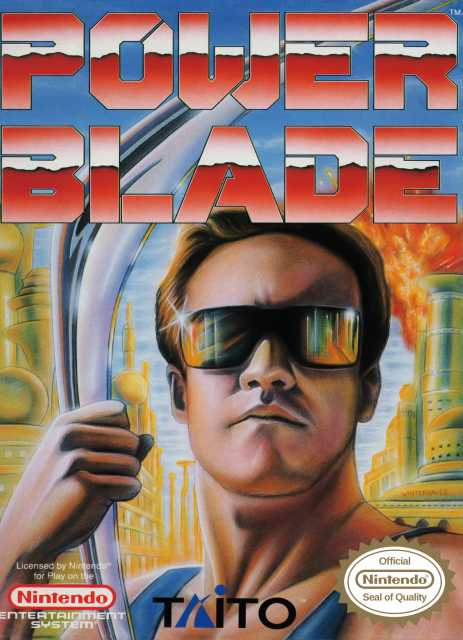