Mario Kart: Double Dash!! is the fourth installment in the Mario Kart series, following Mario Kart: Super Circuit from 2001. The game introduced a number of new gameplay features, most notably the inclusion of two riders per kart.

Mario Kart: Double Dash!! is the fourth game in the Mario Kart franchise. Released in 2003, it was developed by Nintendo EAD and published by Nintendo. It is the only game in the series to allow players to have two characters per kart. The new gameplay features were generally well-received, with 87% from both GameRankings and Metacritic and it's often referred to by fans as the best game in the series.

The game also has a cooperative mode, in which one player controls each character in the kart. Up to two players or four players using co-op mode may compete in Grand Prix mode. One player steers the kart while the rear player holds an item and can throw it to the player up front at any time which also allows to hold up to two items. For the first time in the series, a kart can now activate the all new starting boost technique, the Double Dash!! This super boost can be achieved if Lakitu's Start Signal turns green and both members activate the rocket start at the same time. 3, 2, 1... DOUBLE DASH!!

Players can compete without computer players in Versus mode. Four players race around the track together or separately as a chart keeps track of their points. Unlike previous entries in the series, placing 5th or lower will allow the player to move on to the next race.

Battle Mode features enclosed battle arenas in which players compete in a variety of ways, such as Shine Thief, Bob-Omb Battle, and Balloon Battle. In Shine Thief, all the players try and capture a Shine Sprite and keep it for an amount of time. In Bob-Omb Battle, players collect Bob-Ombs and then throw them at each other in an attempt to steal all of their stars (stars are awarded for hitting another player with a Bob-Omb). In the Balloon Battle, players throw items at one another as they try and pop each others' balloons.

The only game mode that does not allow for multiplayer pits players against the clock to compete for the best time on a race course. Fulfilling specific requirements can unlock a Staff Ghost where they race against a record that was set previously by a developer of the game. The player can create their own ghosts and save them onto a memory card with free space.

Up to eight Nintendo Gamecube systems can be linked together for multiplayer up to 16 players. This game mode has limited options of play as characters and karts are randomly chosen, only Grand Prix, Versus, Battle and Shine Thief modes are available for gameplay and other settings in the options menu are ignored.

Based on the save data located on a memory card for any participating system, it's possible to play on the unlockable tracks or randomly be given a chance to play as an unlockable character.

To opt for multiple players, the screen orientation can be set to one screen, half split or quad split. Depending on the "screens" available allows for up to four players on one console. Starting a LAN game then asks to set the amount of participating players then press A to signal for ready. Depending on the screen split, non-participating players will be replaced by a black screen. (For example, on a four split setting with only one participating player, the other three screens remain blank.) When playing with 6-8 players across two systems, the framerate will be cut in half.

The twenty characters in Mario Kart: Double Dash!! are sorted by weight: Light, Middle, and Heavy. Depending on their weight, there are a certain amount of karts to choose from.

Note: Special item in parenthesis. The only exception is Petey Piranha and King Boo, who get a random special item based from other characters.

In battle mode there are a total six stages to choose from, two of the tracks will become available when unlocked by meeting requirements in Grand Prix mode. 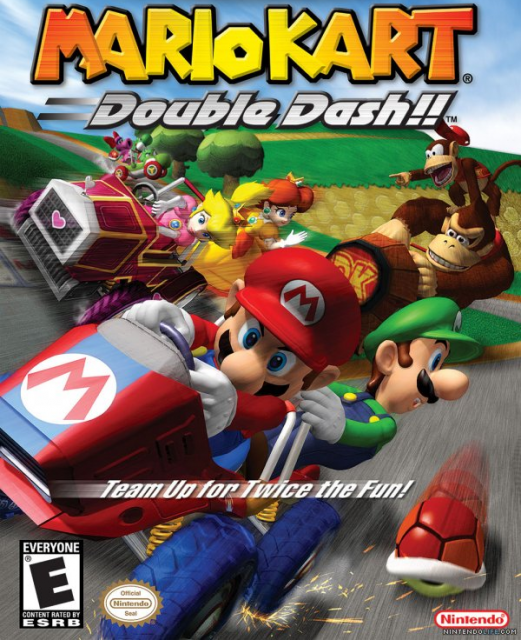