The spiritual predecessor to Battlefield: 1942 released in 2000, Codename Eagle is set in an alternative time line in 1917 where Russia is threatening to overcome the rest of Europe.

You take control of an operative of the secret organization "Shadow Command" known as Red. The goal is to uncover the Tsar's plans for Europe, using whatever means to demolish the Russian war machine from within who are threatening to take control of Europe. The game is set in an alternate timeline in 1917, World War I has not happened and Germany have yet to become involved with the other world powers.

Codename Eagle's online can be played in any of the three modes.

Codename Eagle had several features which would later become well-known and popular hallmarks of Battlefield 1942. This included the free use of vehicles, ranging from small jeeps to tanks to large zepplin airships, in the multiplayer, as well as fairly large and open maps for its time. The developer of Codename Eagle, the Sweden-based Refraction Studios, would later merge with another Sweden-based studio, Digital Illusions CE in 2000 shortly after the release of Codename Eagle. Even before the merger, DICE was already busy drawing up the sketch for the new game, learning from the experience of the development of Codename: Eagle. The Refractor Engine, a production of Refraction Studios, was improved to provide the basis of Battlefield: 1942, released in September 2002. 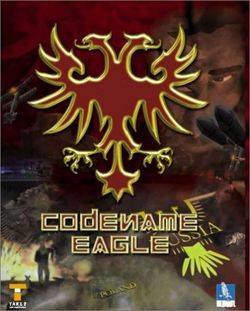