Take on the role of a soldier in the human Global Defense Force or the alien Strogg, and either save or devastate Earth in the process.

2007's Enemy Territory: Quake Wars is an objective-oriented multiplayer first-person shooter, pitting players against players or computer-controlled bots in class-based assault or defense missions. Each side has five classes to choose from, ranging from scouts equipped with sniping weapons to anti-armor-bearing demolitions soldiers, to heavy-artillery spotters. Each side has roughly equivalent classes with small differences that make for minor-but-interesting changes in play style. The majority of matches alternate between defense and assault gametypes for each team, but a number of stages focus entirely on one mode of play for each team. The maps in the game represent specific battles that ultimately determine the outcome of the war.

The gameplay in Quake Wars is very much derived from that of its predecessor (although with numerous significant additions such as vehicles and player-built defences among others), meaning during any given map a team must complete a succession of objectives in order to win. A single map usually contains around 3 or more main objectives, these objectives can be any of the following: Construction (preformed by the Engineer/Constructor class) Demolition (preformed by the Soldier/Aggressor class) Capture the Data-Brain (preformed by any class, can be compared to a variation of the classic CTF mode) Hacking (preformed by the Covert Ops/Infiltrator class) There can also be sub-missions within the map, these usually consist of either blowing open alternate routes or constructing guard towers.

There is always one team on offence and one on defence and depending on the gamemode, there are three different types of play in Quake Wars, those are:

Three maps in a row where your experience points are carried over until the final map is played.

A single round on one map.

Single map, the first team attempts to complete the map and set a time, the offence and defence then switch places and the previously defending team have to beat the set time. This is the primary mode for competitive play.

Class Description:
The Soldier is the class fit for a person that wants to be at the frontline. You'll get more health than other classes and you'll have access to the unwieldy but reliable GPMG (heavy machinegun) and the anti-everything Rocket Launcher. Your main task will be to assault and destroy objectives of the Demolition type, once you have an area held down you'll need to plant and arm a HE Charge and defend it until the timer reaches zero. A Soldier should not be seen as an unstoppable force however and you'll need the full support of your team in order to stay on your feet.

Class Description:
As a Medic your objective should be to keep both you and your team alive in order to complete the given objective. Don't be discouraged by the fact that the Medic won't be able to complete most of the Main Objectives found in the game, without the support of Medics to keep the team at full health and revive fallen comrades any attempts to win the map would be near futile. A Medic also has the ability to call in a Supply Crate that'll automatically distribute Ammo Packs, MedPacks and Grenades. Also, keep in mind that for each Medic your team will get the benefit of 5 additional HP (to a maximum of 20 HP). You'll also be the one responsible for locating and destroying enemy Spawn Hosts (see: Technician) with your Defibrillators.

Class Description:
The role of an Engineer can fluctuate heavily from map to map and even from objective to objective, in one situation you might be needed to stay behind the frontline and set up defences such as Mines and Turrets and in the next you could be fighting your way through hordes of Stroggs in order to get to - and complete - an objective with your repair skills. The Engineer is also the class best suited for driving vehicles through the field since only they have the ability to repair them should they get damaged. The engineer is also the best class for getting exp by parking the MCP by a anti-vehicle turret and constantly repairing it.

Class Description:
As a Field Ops your role will be to set up artillery and rain death on your enemies. You'll have acces to four different types of support (though you'll have to choose one of three different peices to go along with your Air Strike) with different strengths and uses. A Field Ops is often found on high ground where he can get a good look over the enemy emplacements in order to target them with his marker and once he unlocks the Scoped Assault Rifle he'll be a formidable fighting force even from long range. He is also crucial for indoor scenarios given that he is the only class able to supply his team with ammo indoors, in these cases he'll have to try and find a balance between keeping his artillery active and falling back to re-supply his team.

Class Description:
A Covert Ops is an extremely versatile class, you'll have a tool or ability for almost any given situation. You might find yourself on a hill utilizing the powerful and accurate Sniper Rifle or you could disguise yourself as an enemy and hide in their ranks, waiting for the right moment to strike with your mighty Backstab. As a Covert Ops you'll also be a formidable force against enemy vehicles since your EMP Grenades are able to disable any vehicle for a duration of 40 seconds, you'll also have your remote triggered Third Eye explosive camera handy to deal massive damage to anything caught in its blast.

Class Description:
The Aggressor is the Strogg version of the Soldier, they are the ones with access to heavy weapons and high explosives.

Class Description:
The Technician is much like the GDF Medic in that he's the one responsible for keeping health up and reviving his team-mates. There are a few major differences though. The Technician does not have the benefit of an instant-revive that the Medic has, instead he must use his tool on the target for a few seconds in order to get them back on their feet so make sure that the area is safe beforehand. The Stroyent Cells that the Technician distributes are also different from the GDF MedPacks, since the Strogg uses Stroyent for both ammo and health the cells will yield a set amount of both (making the Technician a very powerful solely combatant as well). Although the most important ability that the Tech brings to the table is the ability to create Spawn Hosts by using his Stoyent Tool on an enemy corpse (instantly gibbing the person forcing them to respawn rather than waiting for a Medic, very important so keep that in mind), a Spawn Host can then be used (one-time only) by either you or a team-mate, respawning you in-placewith full health and ammo.  Any good Technician should have creating Spawn Hosts as a top priority once a battle dies down.

Class Description:
Same as the Engineer with the exception of being able to repair objects from a distance once the Flying Repair Drone is unlocked.

Class Description:
An Oppressor is able to perform many of the tasks that a GDF Field Ops can, there are a few minor differences between the two that make them play very differently while in combat however. The difference lies in the Tactical Shield, the Oppressor does not have the ability to distribute Ammo Packs to his team-mates, instead he's there to deploy shields that'll act as improvised cover on the battlefield. The shield will stop any bullet (both GDF and Strogg) and deflect grenades. Your main objective as an Oppressor should be to run in and deploy cover at critical locations such as hallways and bottlenecks, you should also do your best to keep objectives ccover while your team-mates are working to plant a charge or repair an object. The shield will also stick to vehicles giving added protection, put this on a Hog and it'll be able to withstand two tank shots instead of one. Keep in mind though that the shield swears no allegiance and can be used against you if you placed it in a bad location.

Class Description:
Much like the Covert Ops. Differences lie in the Flyer Drone and the Teleporter. The Flyer Drone is a remote controlled flying bomb that you can use to scout ahead or send in towards unsupecting enemies, a direct hit will kill any class. The Teleporter allows you to reach otherwise unreachable vantage points and hiding places, keep an eye out for ventilation shafts.

Chronologically, Enemy Territory: Quake Wars actually takes place before Quake II, which tells the story of a massive human counter-attack on the Strogg homeworld of Stroggos. This apparently occurs immediately after the Strogg are beaten back by the GDF in Quake Wars. This ultimately proves to be a disaster, as every human soldier is lost in the attack save for the player's character in Quake II, a lone surviving Space marine who cripples the Strogg war machine and assassinates the enemy leader, the Makron. Quake 4 continues the story of the Human-Strogg war. 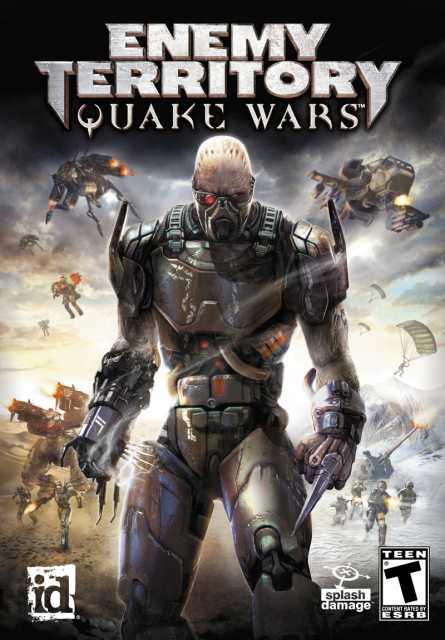