Meridian 59 was the first graphical massively multi-player game. Played on the Internet with hundreds of users able to interact in the same world, the game is often considered the start of modern MMO gaming.

Meridian 59 was the first graphical massively multiplayer game. The game was originally developed by Andrew "Zaphod" and Chris "Zandramas" Kirmse in their parents' basement. They teamed up with Mike and Steve Sellers to form the company Archetype. 3DO acquired Archetype shortly before Meridian's commercial launch in June 1996. 3DO ran Meridian for nearly 4 years, finally pulling the plug on August 31, 2000. Brian Green and Rob Ellis, developers who had worked on Meridian at 3DO, acquired the copyright to Meridian in 2002. Their company, Near Death Studios, continued to operate the game for a small group of dedicated fans until January 1, 2010.

In January 2010, Near Death Studios announced the end of the company, but not the end of Meridian 59 . Without interrupting service, Andrew and Christopher Kirmse, the original creators of Meridian 59, took over the rights with intentions of keeping the game alive and updated for fans new and old. Meridian 59 is currently free and available through the official website, www.meridian59.com.

On September 15, 2012, Meridian 59 was officially made open source, and it was announced that the two remaining official servers (named 101 and 102) would incorporate community made content over time. A major community made patch was released on March 24, 2013.

Meridian's Alpha test started in the summer of 1995. Roughly 35 concurrent players could enjoy the seven rooms, three monster types, two spells, and one quest. Players quickly made their own fun, however, engaging in PVP battles that would litter the streets with corpses. The server was almost always at capacity; So much so that the developers had to randomly kick players from the world in order to log in and debug problems.

Damion "Zjiria" Schubert was Archetype's first hire. He built the first city in the game, Tos. Tos quickly became the hub of Meridian social life. His brother, Tim "Mocker" Schubert, also helped out with level building. Rob "Q" Ellis, one of the first alpha players was recruited by Archetype to lead the construction of the game world.

Beta started in April of 1996, running on a server in Chris' dorm room. Chris had made significant performance optimizations to the server which was now able to handle several hundred concurrent players. The content creators continually added new rooms, monsters and quests in order to support the growing population. The New York Times published a piece of Archetype. The news made its way to 3DO CEO Trip Hawkins.

3DO decided to acquire Archetype for $5 Million worth of 3DO stock. Andrew, Chris, Rob and Damion moved to San Jose. 3DO hosted 5 beta servers through September of 2006 when the commercial version of the game launched.

Meridian's largest expansion launched on June 19, 1997. An entire island was added to the world with 20 new mobs, 2 new schools of magic spells, and bow and arrow weapon skills. For the first several weeks after the expansion, the servers were extremely unstable.

Renaissance launched on March 16, 1998. A number of new high level zones were added in this update, along with the interesting dynamic of Necromancers and Hunters.

In August 1998, Insurrection came online. Insurrection added per-zone PVP objectives throughout the world. Many zones erected a flagpole where a member of a faction could hang their faction's flag. After a brief period, the zone would turn in favor of that faction. Players belonging to the favored faction would experience faction-specific buffs in that zone.

3DO turned off the commercial servers on August 31, 2000. Several server consolidations had taken place prior to this point as players migrated to Ultima Online and EverQuest. The players that remained mourned the loss of their beloved game.

Near Death Studios acquired the rights to Meridian 59 from 3DO and relaunched the game on June 13, 2002. Two shards become available for players.

The largest technology upgrade to Meridian came on October 31, 2004. The sprite based client was upgraded with DirectX lighting to provide a better visual experience to users.

Notable Places in the World

Meridian's advancement system is use-based; That is, the more a player used a skill or spell, the more proficient in it they would become. Players could advance a spell or skill to a maximum of 99%.

Each school is divided up into 6 levels. Players must show enough progression in the prior level in order to purchase the next level of spells. The more spells and skills a player had, the stricter the requirement. Have a high intelligence allowed players to purchase skills and spells at a lower prerequisite requirement. 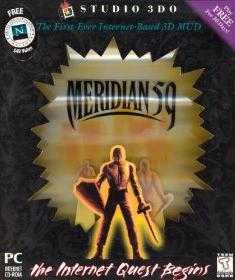