In the seventh game in Namco Bandai's air combat series, and the first on next-gen consoles, you fight to defend the Republic of Emmeria from an invasion by forces from Estovakia.
Xbox 360

Developed and published by Namco Bandai, Ace Combat 6: Fires of Liberation is an Xbox 360 exclusive released on October 23, 2007. Following its release, Namco Bandai has released several paint schemes for the planes that give them higher maneuverability, speed, armor, or payloads.

Ace Combat 6's story revolves around a conflict between the Republic of Emmeria and the Federal Republic of Estovakia. When Estovakia invades the Emmerian capital of Gracemeria, the player takes on the role of an Emmerian pilot called Garuda 1, whose callsign is "Talisman". In addition to this main plot, the game tells several peripheral stories through cutscenes, including a mother on a search for her daughter who she believed died in the first attacks, a story about Lt. Col. Victor Voychek, the former leader of an Estovakian fighter squadron who was injured during the Estovakian attack on Gracemeria, the story of Sgt. Louis McKnight and his tank group, and the new Estovakian Squad Leader, Ilya Pasternak.

Updated mechanics in this iteration of Ace Combat include support attacks. As targets are destroyed, the player earns the ability to call in additional support to either attack additional targets, or to attack enemies who are attacking the player.

Another interesting addition is the support of ESM auras. These are given to the player by either AWACS in the sky or from radar stations. They provide increased targeting for normal missiles as well as special missiles. decreased effectiveness to the enemies weapons are also experienced, but not to a large extent. These auras can also overlap each other for an even more powerful effect.

Players can execute a High-G turn by holding down both triggers and pulling the stick. High-G turns allow the plane to turn tighter but the sudden and constant lose of speed can cause the plane to stall. How long a plane can sustain a High-G turn depends on the plane's stability rating.

Another addition is the ability to select your starting position in missions. During the briefing, you are given different objectives to complete, usually only having to complete a majority of them before the mission is either complete. Each objective is given a letter heading, with a general idea of the kind of combat you will encounter (air-to-air, air-to-ground, air-to-sea, etc.). Each objective will not start until you enter the specified area where its located. This helps in that you don't have to fly all over the map to protect this unit or that unit and keeps you focused on just a small number of enemies, rather then a cluster of explosions. They also allow you to only see units from your current objective on your map which prevents you from deviating from your current objective and potentially failing it.

An extra resupply line is given in certain maps where there is either an airfield or carrier. When you fly in low to an air strip or carrier you are given the option to lower your landing gear and land real time in the game, rather then going to a separate minigame.

Players can earn in-game medals for accomplishing special feats. Some are extremely hard to obtain, such as going through an entire campaign by only using a machine gun, whereas some are somewhat simple, such as killing a certain amount of enemies.

The game was also released with a special edition that contained flight sticks they called the Ace Edge Flight Sticks as well as a custom 360 face plate. The Flight sticks are quite intuitive in that they keep the control labels of the normal 360 controller in case another game would benefit by making use of them.

Deathmatch where up to 16 players try to shoot each other down to gain the most points.

Divides up to 16 players into two teams as they try to rank up more kills than the opposing team.

One team is tasked with defending a target while the other has to destroy it.

Up to 3 players team up to complete single-player missions.

Almost all the playable aircraft are real world planes which are licensed for the game with the exception of the Nosferatu, which is the final plane to be unlocked. Additional authentic planes also take up non-playable and support roles throughout the game.

Following its release, Namco Bandai has released several paint schemes for the planes that give them higher maneuverability, speed, armor, or payloads.

Most notably, a fair number of DLC Plane paint schemes are in the theme of the other Namco Bandai game THE iDOLM@STER. 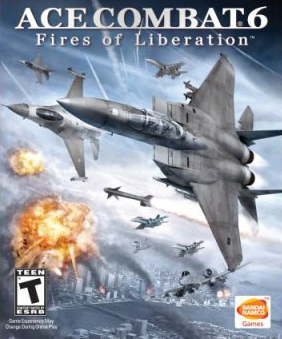