Kirby's Dream Land (published in Japan as "Kirby of the Stars") is a side-scrolling platformer developed by HAL and published by Nintendo in 1992 for Game Boy. The first game in the long-running series starring pink puffball Kirby, Kirby's Dream Land is a simplistic and cutesy platformer in which the player has the ability to inhale objects, including enemies, and spit them out as projectiles. Unlike most platformers, Kirby can also fly indefinitely without assistance from power-ups.

The game's plot involves King Dedede, a large penguin and the self-proclaimed King of Dream Land, who has stolen all of Dream Land's food for a large feast. It's up to Kirby to confront Dedede and his minions in order to retrieve the stolen food.

The game was digitally re-released for the Nintendo 3DS via Virtual Console in 2011. It was also re-released for Wii as part of the Kirby's Dream Collection compilation, while a timed demo version was used for Super Smash Bros. for Wii U. Although the game never received a standalone release for home consoles, it was remade as "Spring Breeze," the first of seven main game modes featured in Kirby Super Star for the Super Nintendo Entertainment System. A more difficult version of "Spring Breeze" known as "Revenge of the King" was also included in Kirby Super Star Ultra, the Nintendo DS remake of Kirby Super Star.

As a fairly traditional platformer, Kirby's Dream Land follows the titular character's quest to save Dream Land across five stages. Kirby has the ability to suck in enemies and then shoot them out as projectiles. Pressing Down on the directional pad will make Kirby duck; if he has something in his mouth, this makes Kirby swallow the object to dispose of it. Pressing Up causes Kirby to inflate with air, allowing him to fly through the air indefinitely. If Kirby exhales afterward, he expels an puff of air which can be used as a weaker projectile. While floating or holding an object in his mouth, Kirby is slower and becomes an easier target for enemy attacks.

Kirby can eat certain food items to restore his six health points; touching or inhaling the food will instantly restore some of his health. Kirby's Dream Land contains two healing items: "Pep Brew", a beverage which heals two points of health, and the "Bag of Magic Food" (later known as a Maxim Tomato), which fully restores Kirby's health. There are also a variety of power-ups that Kirby can collect throughout the game to gain special abilities or attacks:

Each of the five stages consist of a branching pathway to the boss room, where Kirby fights a large enemy before collecting the Sparkling Star, which transports him to the next stage. Most levels also contain sub-bosses, who must also be defeated in order to progress. The fifth level is the only unconventional one, as it is merely a tower where Kirby is required to fight through a boss rush of Dream Land's previous four bosses before reaching the final boss, King Dedede.

After defeating King Dedede, players are given a code to access the game's "Extra Mode", a more difficult version of Kirby's Dream Land. From the title screen, press Up, A and Select simultaneously to enable Extra Mode. This code can be entered from Dream Land's title screen regardless of whether the game has actually been completed or not.

Kirby's Dream Land was conceived by HAL developer Masahiro Sakurai. The protagonist's simple design was first used as a placeholder sprite by the development team, who intended to eventually replace the character with a more complex design. Originally named "Popopo" (the game's working title during development was "Twinkle Popo"), the main character's name was later changed to "Kirby" in reference to a brand of vacuum cleaners.

The game also contains references to HAL's preceding Adventures of Lolo series, most notably the second stage boss fight against Lololo and Lalala. 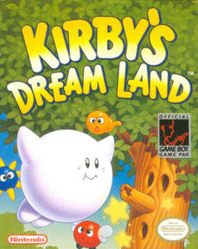