Metal Slug 4 is another game released in the Metal Slug franchise. The game was released for the Neo Geo, MVS arcade console, and was later ported to the PlayStation 2 and Xbox. In North America and South Korea, these latter two versions were packed with Metal Slug 5.

Metal Slug 4's gameplay is very similar to previous iterations of the franchise. The player can choose to play as one of four characters: Marco Rossi, Fio Germi, Nadia Cassel, or Trevor Spacey. The basic gameplay of Metal Slug 4 is simple; you have a gun, you have to kill enemies, you have to get to the end of the level. Metal Slug 4 adds a bonus scoring system, that grants the player bonus points if they can kill a certain amount of enemies within a certain amount of time. When the player picks up an emblem, a timer appears, and the player has a time limit to kill a set amount of enemies. If the player survives, they will be awarded these bonus points.

One year after the story of Metal Slug 3, the world is under a new threat of a deadly cyber virus that has the potential to destroy any nation's military computer system. Tarma and Eri are unable to help because they are involved in other things, so Marco and Fio are called in to investigate the virus and are joined by two new characters, Nadia and Trevor. In their investigation, the group discovers that the terrorist organization Amadeus is behind the threatening cyber virus. Marco, Fio, Nadia and Trevor take the battle to Amadeus in this exciting side scrolling action game. 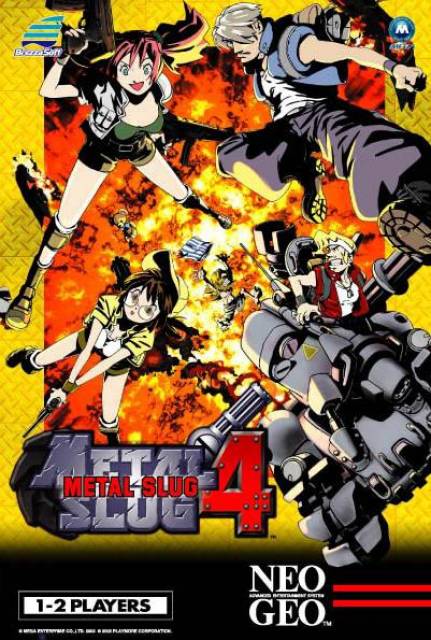