Join smooth-talking gecko/secret agent Gex on his third platforming adventure. This time around, he's tasked with saving the beautiful Agent Xtra from the clutches of his arch-rival, Rez.

Gex 3: Deep Cover Gecko is the third and final game in the Gex trilogy and the second 3D platformer featuring the suave superspy amphibian of the same name. A portable downscaled version of the game, named Deep Pocket Gecko, was released for the GBA later the same year.

Gex discovers that his arch-enemy Rez has kidnapped Agent Xtra. A secret agent that he met in Gex: Enter the Gecko. He battles his way through a Batcave-like lair he has in the TV world and begins another adventure. Each level parodies a certain aspect of television culture. Gex enters each level through a television set. He must collect remote controls to advance to the next level in order to complete his mission.

In this installment of Gex, four new characters are introduced. There's Agent Xtra, a live-action character played by former Baywatch starlet Marlice Andrada, who is kidnapped by Rez. There's also Alfred, Gex's butler. Lastly, Gex's cousins Rex and Cuz come along for the adventure, both of which are controllable later in the game.

In Gex 3: Deep Cover Gecko, there is an interesting system used to select and play levels. Each level is a parody of a movie or time period and is accessible by entering TVs. The levels include:

Although the American version had Dana Gould continue his role in voicing Gex, the UK and European releases had well-known Red Dwarf actor Danny John-Jules voice the gecko. 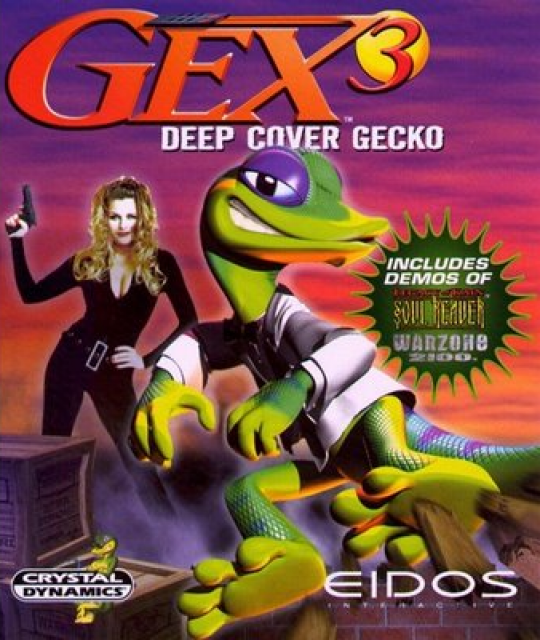