Step back into the shoes of Nathan Hale and fight against the Chimeran invasion of the United States in Resistance 2.
PlayStation 3 PlayStation Network (PS3)

Resistance 2 was the highly-anticipated sequel to the PlayStation 3 launch title Resistance: Fall of Man, developed by Insomniac Games and published by Sony Computer Entertainment America. This first person shooter was released in North America on November 4, 2008, in Japan November 13 and in Europe November 28.

Resistance 2 was first announced in January of 2008. Insomniac Games promised that the game would be bigger in almost every respect when compared to its predecessor. The game features a fully-fledged single player campaign, a separate cooperative campaign, and online multiplayer mode that allows up to 60 players to compete at one time. The single player campaign continues where the previous game left off and again follows the main character, Nathan Hale, as he tries to repel the Chimeran invasion , this time from his home country, the United State of America. The separate cooperative campaign is similar to its single player component, however, Nathan Hale is not a playable character. Co-op supports two-player split-screen or up to eight players online, where players can select from a trio of classes which are soldier, special ops, and medic. Both the single player and cooperative campaigns include boss battles and 12 new types of Chimeran enemies. In addition to expanding Resistance 2's cooperative and multiplayer aspects, Insomniac Games also implemented numerous technical and community-oriented improvements over the first game. Some of these enhancements include:

A Limited Edition bundle was also released, and it included:

This Limited Edition bundle was available at launch for a recommended price of $79.99 USD

Resistance 2's single player campaign picks up at the exact point where Resistance: Fall of Man ended. Having destroyed the central Chimeran Tower in London 1951, Nathan Hale is approached by Black Ops soldiers who immediately sedate then extract him on their VTOL aircraft. Sgt. Hale is flown to a top-secret Special Research Projects Administration (SRPA) military research base in Iceland, codenamed "Igloo". This research base is devoted to trying to reverse engineer the advanced technology of the Chimera. It is here that Hale discovers that he is not the only individual who has not succumbed to the Chimera virus. These individuals comprise a group known as "The Sentinels" with enhanced reflexes and combat abilities. Soon after Hale meets the Sentinels, the Chimera learn of the existence of the American base in Iceland. As a result, the Chimera immediately send a Goliath to attack the research base. Hale and the Sentinels combine forces in order to repel the Chimeran offensive, and they eventually escape making their way safely back to the United States.

Two years later things are looking bleak for the United States. The U.S. military is being strained by the Chimera's two-pronged invasion of the East and West Coasts. In addition to this, the Chimera infestation has already claimed several U.S cities, including Chicago. At this point It seems that Hale and the Sentinels are the America's last hope against the seemingly unstoppable Chimeran invasion force. Together they had just saved San Francisco from the immediate threat

of invasion. Soon after saving San Fran, the Sentinels learn of an important Chimera communications hub located in Chicago. Thus Hale and the Sentinels pack up and head to the East Coast, where they hope a surprise attack will destroy the Chimera's presence in the U.S. It is in Chicago that Hale encounters new Chimeran enemies like the Grim and the Leviathan.

The gameplay in Resistance 2 is different from its predecessor in that Nathan Hale no longer acts as a " one man army." Rather, Hale is always accompanied by fellow Sentinel members (Hale belongs to the sub-set of the Sentinels known as Echo Team). Because of this change, the player will now encounter new situations that encourage squad work. Hale's teammates also serve as a vehicle to relate critical information to the player. They constantly update Hale with news from the home front and they each have their own individual personalities and back stories that are developed as the game progresses. The player should also notice changes within Hale throughout the game. Ted Price was quoted as saying "Hale is still fighting the [Chimeran] virus. He's resistant, but only to an extent." Thus, it is assumed that Hale will undergo a change of some kind during the course of the campaign. Price is also quoted as saying that the changes Hale undergoes and his fate are both "creepy developments."

The Chimera enemy from the original Resistance: Fall of Man are much of the same. As in they are an alien/human hybrid species [Alien Zombie Disease], this means that they are NOT alien but are in fact humans infected with an alien disease, Even the games end boss Daedalus was originally a human by the name of Adam Shepard infected with "Pure Chimera" DNA. They're bodies have 12 times the metabolism which results in their healing abilities however increases their body heat to explosion level, so any Chimera breed that has regenerative health also has some form of heatstack on their back. Currently there are 42 known Chimera Breeds, which are the following;

Elite Chimera are chimeran breeds that require much more firepower to bring down than normal Chimera. Essentially making them boss characters.

Resistance 2 brings back many weapons such as the M5A2 Carbine, L23 Fareye, and Bullseye, which is significantly improved from the original game, but also adds all new weapons to the game.

The Cooperative multiplayer mode is a class-based shooter where players take on the roll of generic soldiers to fight the Chimera enemy. Unlike Team Fortress 2, players battle against bots and not other players. Players may only choose to fight on the side of the humans, they cannot fight as Chimera in co-op. This mode contains 6 unique maps, each with objectives that are randomly stringed together depending on the number of players and their respective levels. The number of enemies and their difficulty is also tuned to the number of players and their levels. Players are also able to level up their classes from 1 - 30, buy upgraded equipment with acquired Gray Tech, unlock alternate guns as well as special skills called Berserks. Each class has it's own strengths and weaknesses and requires each member to know the role of their class and be able to use it effectively in order to complete the mission; no one class is entirely sufficient (although the medic comes pretty close.) Each level also contains collectible intel called Status Reports. The cooperative mode has garnered much praise for the game.

The soldier is essentially the "tank" of the game. He can take quite a bit more damage than the other classes and has a powerful Primary Weapon. Out of the three classes, the soldier is offensively the best. He is armed with the Wraith (mini gun) with an alternate fire that deploys a force barrier ( energy shield.) With this equipment, soldiers are able to decimate the enemy from behind their shield. While very effective, the soldier burns though ammo pretty fast and the shield will deplete in the blink of eye when taking a lot of fire. As a result, the soldier requires nearly constant ammo refills from the Special Ops to keep the shield up and remain offensively effective.

The medic, as the name implies, is the healer of the group. He is equipped with a Phoenix or "healing weapon" that siphons energy (health) from targeted enemies and converts it to Bioplasm, filling up the alternate fire. When enough energy has been siphoned, the player can fire a rocket-launcher-like healing burst at his teammates to heal them. While siphoning energy from enemies, the medic will also heal himself making him one of the most difficult teammates to take down as long as he is firing.

This class is best known for being the damage dealer and the armory. He can distribute ammo and grenades to his nearby teammates and he can also earn and distribute advanced ammo that deals more damage. Their primary weapon, the Marksman, is a very powerful weapon allowing for powerful burst of damage however it is necessary to reload very often. The Special Ops also has the least health of any class, meaning that the medics need to pay particular attention to keeping the Spec Ops alive when they are offering support on the front lines.

Gray Tech is the Cooperative mode's version of currency. It can be used to purchase upgrades from the Equipment Room menu. Acquiring Gray Tech is simple. When a boss character is defeated, they will typically drop a gray-looking pod. When you or any teammate collects this pod it evenly distributes the contained Gray Tech amongst all allies in the area, typically 1 or 3 pieces per pod.

The Berserk is Resistance's version of a super. As players damage enemies, absorb incoming fire with their shield, resupply allies with ammo, heal allies, or gain XP through any other method, this meter will gradually fill up and when full it will typically begin blinking. At this point, you can hit the Down Button on the D-Pad and unleash it. Each Berserk grants different special abilities to the player and at this time each class has 3 to chose from; 1 is default and the other 2 must be unlocked by leveling up. To change it players must go into the Equipment Room menu and select the option to change their alternate weapon. Once that is done then it will ask you to choose a Berserk.

Currently, there are 6 unique maps, all re-purposed levels from locations visited in the single player campaign. Each map has a set number of different objectives that are randomly stringed together. Each map also contains several rewards called Status Reports. Once a player beats a mission on the particular map, he/she will be rewarded with a Status Report which can be viewed in the rewards menu of their profile. In order to unlock more maps, players will have to collect a certain number of reports. However, this only factors while creating a game because as long as one person in your party has a particular map unlocked than anyone can play on it. Acquiring all status reports across all levels will grant the player a Gold Trophy. The following are the maps, in order, and how many reports they contain:

Resistance 2 supports up to 60 player battles in this online mode. During these battles, players are split up into smaller squads and given specific tasks in order to gain XP and defeat the other players. Players unlock different skins, accessories and berserks as they level up their competitive characters. You can also create custom matches but unlike the cooperative custom matches, the players don't actually earn XP for playing in these games.

You can unlock a lot of stuff in competitive multiplayer. You can also level up your character. There are 30 levels.

You can also download 2 free skins from the PSN. One of them is A grim skin and the other is Dr.Malikov.

Insomniac Games released an exclusive new trailer for Resistance 2 in Sony's Press Conference for 2008. Ted Price, currently President and CEO of Insomniac Games walked up on stage and showed off a stage demo of one of the new boss fight s in Resistance 2. Soon after that he reveals a new exclusive trailer of Resistance 2 showing off the invaded Chicago. When the trailer is about to end right before the PlayStation 3 logo appears a subliminal message of a website appears. That website is projectbraham.com. 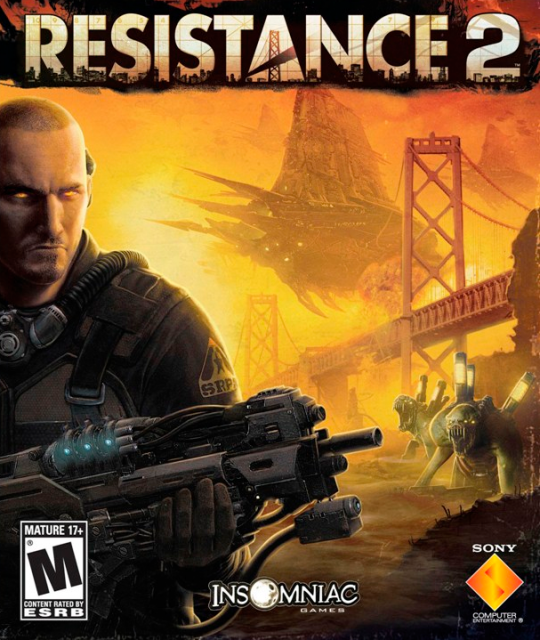