NovaStrike is a dual-joystick arcade shooter from Tiki Games. While battling both airborne and grounded enemies, players can upgrade the Scythe fighter ship to improve its weapons and capabilities through seven levels of free-roaming play.
PlayStation Network (PS3)

A sci-fi war zone that pits players against an onslaught by the world-conquering Draelus. From the cockpit of their experimental Scythe fighter, players utilize free-roaming flight and multiple weapon variations to combat an armada of alien forces in the air and on land. With ship and weapon upgrades, and a slew of allied units, players engage the Draelus in a variety of planetary environments, completing objectives and facing fearsome opponents in their fight to drive back the invasion. 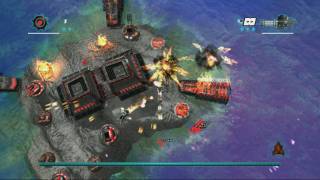