19XX: The War Against Destiny

The fourth entry in Capcom's vertical scrolling shooter series for the arcade.

The story takes place during a fictional war and follows a lone pilot trying to save the world from an evil corporation trying to start a third world war. The player must take control of the pilot and battle his way through six stages of mayhem and climactic boss battles.

The piloting player selects one of three different planes, each with a unique statistic in three different categories; speed, homing and power. In addition, each plane will get a damage boost to one of its existing three weapons. During game-play the pilot will face a horde of enemies and can find multiple ways to defeat them. Holding down the firing button will charge up a homing missile that will lock on to the target and give a massive damage boost. In tight situations the pilot can also use an evasive loop or drop a smart bomb to evade/destroy incoming fire. Power-ups and medals for extra bonus score will also drop from various enemies as the game progresses.

There are three different planes to pilot, each with a set of unique statistics and a special weapon. The special weapon skill set determines which weapon in the game the player can power-up one more step.

Strong in power but rather slow moving with a weak Homing stat.

Represents speed for fast and evasive maneuvers, very weak in Power and medium-weak stat in Homing.

Special weapon: Laser, will produce a twin-laser shot for better spread when powered up.

The most balanced plane in the game with a strong Homing attack.

Special weapon: Vulcan, will produce three shots when powered up.

There are three unique weapons featured in the game, each has its own strength and weakness.

Missiles: Shoots out three missiles in the classic spread pattern. Stronger at close range but over all a weaker weapon compared to the other two.

Vulcan: Your basic machine-gun styled weapon, the default starting weapon for every plane. A very balanced weapon with a medium spread and medium-strong firepower.

Laser: Strongest in firepower but the weakest in spread, will penetrate through anything making it very effective for boss-battles.

19XX: The war against destiny features a classic Capcom style of soundtrack.

Mission 1 - A Bit of Blue Sky Between the Clouds

Mission 3 - Dance of the Green Gnome 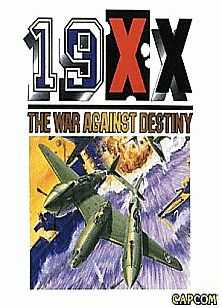