The Mark of Kri

The Mark of Kri is a mash-up of American artwork styles like Disney and Don Bluth with a combination of Polynesian, Asian, and European cultures, and the kind of over the top, brutal violence of the Conan series, all swirled up into one unique if linear, game.
PlayStation 2 PlayStation 4

The Mark of Kri is an action-stealth game released by SCEA San Diego Studios for the PlayStation 2 in 2003. The game allows the player to assume the control of Rau as he turns into a warrior under the instruction of his master, Baumasu. The game's central mechanic is using the right analog stick for targeting, to select and engage multiple targets in combat. The combat is deliberately paced, and rewards use of counter actions and well placed strikes above frequent strikes. Combat can end within a few strokes, or last for several minutes depending on how the player approaches each encounter. Battles can also be avoided using the stealth system, and while the game does not often allow the player to bypass fights, you can finish them before they start using vicious executions.

The art style of the game is a very distinct combination of Polynesian, Asian, South American, and Old European cultures, with character design similar to both Disney and Don Bluth's own unique styles. Most of the artists on the game's team came from prestigious companies such as Warner Bros, Disney, Dreamworks, and Don Bluth, thus explaining the artistic direction. The cutscenes in the game, both pre and post mission, unfold with "sketches" being drawn as the narrator, a servant to Rau, telling the story. The highlight of this being that, the last picture before the mission starts is fully colored in, and then as the game loads, the exact pose, camera angle, and locale shown in that last picture become the starting point of the mission.

The game features a rudimentary Achievements system, entitled Baumasu's Challenges. These range from instructions to perform certain combos on opponents, to using the unarmed stance to counter a certain number of enemies and take them out that way as opposed to basic combat. Also scattered around the levels are Tukus, special items that unlock a special reward after the last one is found.

The game controls with the left analog stick to move, with camera control mainly out of the player's hands.

Combat works in multiple fashions. The first thing the game teaches is how the melee combat works. The right analog stick projects a beam of light, entitled focus, that selects targets from enemies. Once the enemies are targeted, Rau's movement becomes centered around the opponent, strafing, circling, and dodging his, or their, attacks These targets are assigned to buttons on the face of the controller. Moves become contextual from there: If the player has one target, the X button (the first button assigned) is an attack button, while square and circle are combo modifiers, allowing the player to vary the combos into at most four hit combos which do not land as often thanks to the AI of enemy players. However, if they do land, the four hit combos are essentially instant kills, demonstrating Rau's incredible brutality as well as crispness in combat. As you gain more targets, they are assigned to the other two combat buttons, Square and Circle. From that point, pressing each button sends you to attack those opponents, with directional positioning playing a large part in what moves are available.

This mechanic stays the same with all three melee weapons, the Sword, Staff, and Axe. The differences between the weapons are basic. The sword is a middling weapon between strength and speed. The staff is fast, and allows the targeting of multiple enemies per weapon, but does significantly less damage. The Axe is lumbering and slow, but it's devastating power balances out the slow swipes. One errant swipe could end an entire battle if the enemies are close enough.

The second form of combat taught is stealth combat. The game uses the targeting system in a similar way, selecting targets. While holstered, Rau enters a stealth mode where he moves slower and does not have a drawn weapon for self defense. The last selected weapon determines what weapons are used for stealth kills, of which there are multiple. Multi-man stealth kills are also possible, where the player puts in a three button sequence to take down two enemies, one after another. You can also cling to walls, and target enemies. As they approach, inputting the button will grab them, pull them around the corner, and assassinating them out of sight.

One of the mechanics to assist with the stealth gameplay is Kuzo, Rau's spirit guide and the game's narrator. Taking the form of an eagle, Kuzo can perch on certain spots and survey areas ahead of Rau. Kuzo can also be used to pick up items on perches, set off switches and ladders, and read large inscriptions, giving the history behind the markings on Rau's body.

The third form of combat taught is Archery, after a bow is awarded to you for completing the second mission. The Archery system is based on the arching of the arrows. After acquiring a target, Rau tracks the target automatically, leaving the player free to use the analog stick to arch the shot. The icon will flash repeatedly when the arc currently made would result in a headshot. A more advanced technique is to use Kuzo as a spotter if the enemy is off screen, and using the landings of the arrows to readjust until hits are scored on enemies.

Progression through the levels is mostly linear. On occasion, the player is presented with two paths, but they'll usually end up going to the same place, merely presenting different ways to deal with the same situation (stealth, or bust everyone up). After completing a level, Rau returns to a hub, a tavern near where he has grown up all of his life. From here he accepts jobs, talks to family and friends, and visits the Sage upstairs. The Sage carries a series of tarot cards and is the in game interface to accessing in game content, such as the required commands for cheats, art, and cutscenes. It is also possible to retry the levels from here.

The unlocks come from both Baumasu's Challenges and the Tukus, spread around levels. Each level has five challenges and one Tuku. After all challenges are completed, an Arena is unlocked via the Sage in the hub area between levels. The arena has two modes, Time Attack and Body Count. Time Attack sets out a few waves of enemies and challenges the player to dispatch them as quickly as possible. Body Count gives players a time limit and a constant flow of enemies to violently dispatch how you please. Both modes offer all of the weapons without any progression, and it's the first chance the game gives you to hold Baumasu's axe and see the terrifying damage it renders. Each mode in the Arena has challenges, and as more arenas are unlocked, the challenges become more intricate and numerous. Completing all of the challenges for Time Attack stages unlocks concept art while completing the challenges in Body Count unlocks costumes. If all of the Tukus are collected, Rau gains the ability to bring every weapon into prior levels.

Shortly after the release of The Mark of Kri, Jay Beard decided to start his own studio. Many of the people who worked on The Mark of Kri joined Jay Beard and created BottleRocket Entertainment. They were later commissioned by Sony to develop the sequel to The Mark of Kri, entitled The Rise of the Kasai. 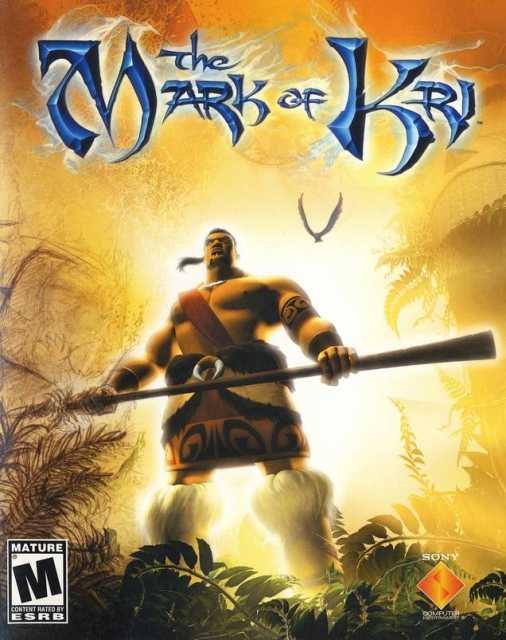