Brothers In Arms Hell's Highway tells the story of Operation Market Garden (the largest airborne operation in human history) through the eyes of sergeant Matt Baker. The game released on the Xbox 360, Playstation 3, and PC during September 2008. The Xbox 360 and Playstation 3 copies of the game were released on September 23rd, while the PC version came out a day later, on the 24th.

The game takes place during September 1944, as the Americans invade Nazi-occupied Holland during 'Operation Market Garden', as it was known. Market Garden was a very ambitious plan, which was intended to culminate with the Americans cutting a path straight to Berlin before Christmas 1944.

Brothers in Arms: Hell's Highway is a first-person shooter, like the rest of the games in the series. Crucially however, it retains the emphasis upon strategic actions. Rushing forward will do little more than kill the player rather players must strategically command their squad mates to provide covering and suppressing fire in order for the player to flank the enemy.

As with previous games in the Brothers in Arms franchise, individual soldiers are not incredibly strong and succumb to their wounds after sustaining only a few bullets. For this reason, it is important to move soldiers in a manner where they can exploit weaknesses in enemy defenses.

Characters previously established in the franchise, such as Joe Hartsock, reappear, though they are not playable. The game also includes full body awareness, which previous Brothers in Arms titles did not. This is due to the use of third person models, in which the player's view is placed.

Players take control of Sergeant Matt Baker, a squad leader that, through months of combat, is starting to ask himself the question "How many lives is one officer worth?" After being deployed as part of Operation Market Garden, the largest Airborne operation ever executed, Baker commands his squad through Holland and is set with many tasks of securing bridges, roads, tanks and 88s with the hope of then being able to move into Germany. The game follows Matt Baker and the 101st Airborne assault on the city of Eindhoven as well as the many German counterattacks. Along the way, Baker is reminded of the horrors of war as he sees his fellow soldiers as well as innocent civilians be killed by the Germans.

Brothers in Arms: Hell's Highway takes a strong look at Matt Baker's relationships with his squad and how he copes with their deaths. Baker often faces hallucinations which contain ghosts of his former soldiers who were killed under his command; we often see him talking to Private. Leggett, the radioman killed during the attack on Normandy.

Many scenes in Hell's Highway focus around the "cursed" pistol, which Baker is in possession of, that has the words "For Matthew, Brothers in Arms"

engraved on the side. It is a Colt. 45 given to Baker by his father, Col. Joe Baker, as he wanted his son to be safe if another war arose. In Brothers in Arms: Road to Hill 30 Baker is seen giving the pistol to Sgt. George Risner before D-Day who is then later killed on D-Day. Both Pvt. Larry Allen and Pvt. Michael Garnett get hold on the pistol and are then also killed whilst with Pvt. Leggett. The rest of the squad blamed Leggett for Allen and Garnett's deaths, and on D-Day 7 Leggett was killed while firing at the Germans with the pistol at Hill 30. Baker's squad became suspicious of the pistol as they believe that anyone who holds it will be killed, scenes in Brother In Arms: Hell's Highway often have people reminding and warning Baker of the "curse" on the pistol.

The game closes with Baker standing up in front of his team and speaking about the supposedly cursed pistol. He tells them it's "Just a goddamn gun", but hurls it away regardless. It is unknown if he intends to dispose of this pistol, of if he threw it away in order to regain support from his team.

While playing as Baker, players are encouraged to move slowly and think tactically about their methods of approach. Players are allowed to manage small squads of soldiers, each with their own benefits and setbacks. For example, players can control a machine-gun team, who will set up a Browning M1919A6 and pump hundreds of rounds at the enemy. They are weakened by their long reloads, and general exposure to enemy fire - after all, the idea of a machine gun isn't that you hide - it's that you make an entire enemy squad keep their heads down. When a team is killed in action, they are not gone for good however, and will rejoin the fight at the end of the skirmish. Even so, losing team members is not good, due to the fact that they may be useful to have during combat. It is possible for the player to lose their entire squad, forcing them to advance solo; a tactic which is both suicidal, and virtually impossible to succeed with.

Hell's Highway is the first game in the Brothers in Arms franchise to include a fully-fledged cover system, as a bonus. Rather than simply crouching behind a wall, it is possible for the character to actually enter cover by leaning against the wall. It is possible to ' blindfire' over or around cover, in order to minimise exposure to enemy bullets. Enemies, and friendly soldiers, will also use these tactics, so it is imperative for the player to understand the cover system, and use it their advantage. If a Nazi is hiding behind a barrel, a few bullets will quickly negate any advantage he may have held, as Hell's Highway also includes an environmental damage system. Some cover can have its weaknesses, such as tables. They are wooden, and wood can easily be penetrated by bullets. If the players sets their teams up correctly, then they can kill a hostile using weak cover before he even hits the floor. Similarly, some cover is much stronger than others, such as concrete walls. These cannot be penetrated as easily, and therefore are sometimes useful to hide behind.

Rather uniquely, the game does not depict Baker taking several bullets and continuing to move. Instead, the game suggests that rounds are going to be passing around Baker. As bullets miss Baker, the screen takes on a red scheme, before Baker is killed. Only one or two shots are needed to kill, and the rest of the bullets going past give a similar threat style as other titles (such as Call of Duty) use for injuries. The system is known as the "Threat Indicator", and is intended to give a heightened sense of realism seeing as a single bullet can prove fatal in a battlefield.

Hell's Highway also includes additional missions, outside the character of Matt Baker. Players take on the role of a tank commander, and command an American Sherman tank around an area, wiping out the Nazis. These missions are relatively straightforward, though received negative response from fans of the franchise, who felt it deviated too far from the main characters. These missions are few and far between during the campaign however, and are relatively straightforward. Tank sequences are very linear, and make use of another new feature in the game: the 'Action Camera'. This camera adds a more arcade experience to the Brothers in Arms universe, by cutting to a Nazi in slow motion should you score a headshot, or use an explosive. Gore is increased during the camera sequence, and it is not uncommon to see limbs being torn off by explosions.

Brothers in Arms: Hell's Highway includes a variety of weapons employed by both the Nazis and the Allies. Weapons can be scavenged from fallen combatants, though generally you will start with a satisfactory load-out. Baker's M1911 pistol is not listed below, as it cannot be dropped.

Reviews for the game have generally been good. Critics praised the game's voice work, story, and portrayal of the grittiness of World War II. However, the multiplayer aspect was received poorly and a few bugs here and there hurt the overall score. The Xbox 360 and Playstation 3 versions both hold a score of 76/100 on Metacritic while the PC version has a score of 79/100.

The Limited Edition of Hell's Highway contains a 6 inch Sergeant Matt Baker figure with 13 accessories, a 32-page Brothers in Arms First Edition Comic Book, a full color map of Operation Market Garden, a code for two special multiplayer characters and special packaging. This special packaging is easily identified, as it is much, much bigger than that of other Xbox 360 titles, which are the size of a standard DVD case.

Brothers in Arms: Hell's Highway requires 5.2GB of space to install on an Xbox 360 HDD. 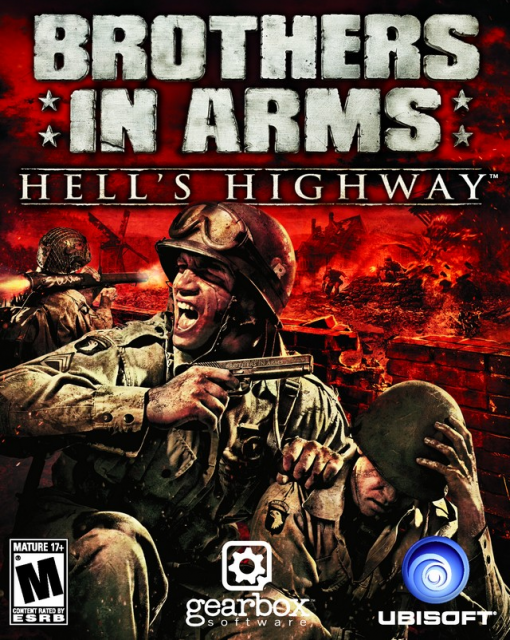