Star Ocean: The Last Hope is the fourth installment in the Square Enix/Tri-Ace RPG series to be released outside of Japan, and is the fifth game in the series.
Xbox 360 PlayStation 3

Star Ocean: The Last Hope is the latest installment in the Square Enix Role-playing Game series, which is now available on the Xbox 360. Unlike the last game, Star Ocean: Til the End of Time, this one will feature the ability to have up to four characters on screen during the battle mode, and the game itself is also more team-oriented. In this installment you'll play as hero Edge Maverick along with heroine Reimei Saionji. Star Ocean: The Last Hope also features more of a sci-fi emphasis than past titles with the ability to control your own ship, on a large scale, with the ability to travel betweem numerous destinations.

"AD 2064. Humanity made its third and most costly mistake. World War III. Weapons of mass destruction deployed with impunity, razed the land in the blink of an eye. People believed it's the end of the world. The planet Earth was dying. So humanity began to search for a new home in space."

A quote from the Star Ocean: The Last Hope E308 trailer.

The game follows Edge Maverick and his strange group of friends he makes on other planets, along with his childhood friend and romantic interest Reimi Saionji. The group becomes entangled in a struggle for the survival of humanity against an artificial agent of violent evolution that corrupts all life it comes in contact with. The game focuses heavily on character development and interpersonal relationships, fleshing out character personalities as the story progresses.

A young, upstart member of the SRF, he is dedicated to his mission and trying to overcome his longtime friend Crowe. He fights using a sword and physically based special attacks.

The female lead of the game, Reimi fights using a bow and arrows. She is timid and unsure of her abilities, but is willing to follow Edge to the end of the universe.

A young man that Reimi and Edge meet on their first mission, he is of an alien race that was previously unknown the general population of earth. He fights using a rapier and magic.

A young girl who adds "'kay" to the end of every sentence and enjoys giving nicknames to other members of the party. She fights using an axe and summoning magic.

An enormous, hulking, robotic man that traded his organic body for the body of a cyborg. He is levelheaded and objective. He fights using lasers and missiles.

A small cat-girl, meracle says meow after many sentences, and is very peppy and upbeat. She fights using her claws and physical, acrobatic attacks.

A featherfolk girl, she has a high pitched voice and the wings of an angel. She cannot fly however, one of the few of her people that cannot. She fights using a staff and can use powerful healing magic.

A voluptuous woman who at first attempts to kill Crowe, but later grows to forgive him. She joins the party to get closer to Crowe. She fights with a staff and magic.

A war-hardened and cynical man who is slowly dying of a degenerative disease, he has chosen to live out his last days as a warrior. He fights using a laser scythe.

This installment will include the real-time based battle system like in the other Star Ocean titles with a newly added Rush Gauge. The Rush Gauge can be used to activate astounding special moves and deadly combos. Another new feature to the battle system is the ability to jump, this can add to aerial combinations and create more depth to the fast-paced battle system. The player is given the ability to dash short distances on the field screen, allowing the player to rush past enemies, making it possible to avoid a battle. The game will feature a separate battle screen but will not have random battles. You will be able to see the enemy before the battle activates.

You achieve these in battle by performing very specific actions or by doing an action a certain number of times. Each character has his/her own set of trophies to unlock, some of which are described in your inventory screen, but most of which are secret.

Each time you fight a monster for the first time, you unlock monster data. You then earn credits for each time you defeat each monster, which can unlock special abilities to be transferred to an item, referred to as a monster jewel.

Each time you find or buy a new weapon, or you come across certain enemies carrying weapons, you unlock weapon data. This data is really only useful for informational purposes and achievement hunting.

There are several spaceships you can interact with, with data about the ship hidden in various locations. This is also really just informational data with achievement implications.

You can group your characters into 4 groups of up to 3 characters in each group. The combination of several attributes contributes to forming recipes for new items. You can then use ingredients or materials that you have found via treasure hunting, purchased, or won in battle to make those items. Recipes may also be obtained through side quests.

You earn experience, individual SP, and party SP. Experience goes toward increasing your characters stats, which occurs automatically at each new skill level. SP is used to unlock new attacks or skills for each player. Party SP is shared across the entire party and can be used to unlock skills for any party member. Party SP is also used in recipe creation.

Star Ocean: The Last Hope follows in the footsteps of its predecessors and has a primarily real-time combat system. The character controlled on the battle field may also be changed by will of the player. The character initiates a battle by touching an enemy in the field screen and different situations occur depending on the area of contact. If the player manages to initiate the battle by touching the enemy from behind, the battle will begin with a Player Advantage and the enemies will be stunned for a shot period of time. However, if the enemy ambushes the player by initiating the battle by attacking the player from behind, the battle starts with an Enemy Advantage and all the enemies will have their Rush Gauge half filled at the start. A new battle mechanic is also introduced in this installment named Blindsides. If the player controlled character holds down the charge button and initiates a dodge right before an enemy attack, they will perform the deadly blindside maneuver. Blindsides automatically move the player behind the enemy and a 100% critical hit chance rate for the next few attacks.

When certain requirements are met in battle, tiles are awarded to the player's bonus board. Different colored tiles correlate to a different bonuses awarded at the end of battle:

Bonus board tiles stack so it is player advantageous to collect as many tiles as possible. It is possible to lose tiles, however, if the player controlled character dies or the character receives a critical hit. In this situation the player loses half of their connected tiles of each color ie: if you have fourteen connected blue tiles you end up with seven. It is advantageous to earn bonus tiles in such a way as all tiles are connected to one or more others of the same color, as non-paired tiles will always be lost.

Current reviews of Star Ocean: The Last Hope have ranged in the 50 to 90 range. Critics have noted that occasionally weird dialog and long cutscenes hurt the story, as well as having no option to turn on Japanese voice-overs. Reviewers have been more comfortable with the soundtrack, combat, levelling, framerate, and the sheer size of the game, however. Note that this is a 3 disc game. It does a decent job at limiting disc swaps. Near the end of the game you have access to a teleporter to travel around to the locations you've previously visited, and disc swapping is required here. 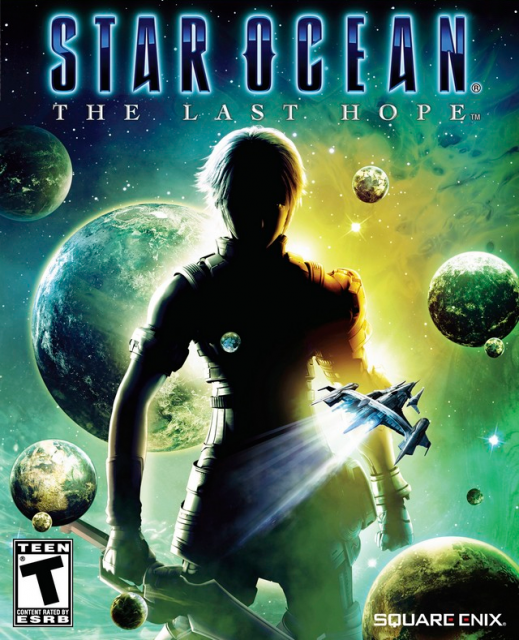