Ratchet and Clank Future: Quest for Booty is a stand-alone PSN title that continues the adventures of Ratchet on his quest to discover the answers surrounding Clank's mysterious disappearance.
PlayStation 3 PlayStation Network (PS3)

The game is stand-alone and does not require the user to have Tools of Destruction. As with most Ratchet and Clank games, players take control of Ratchet who wields a large wrench and a huge arsenal of weapons. This time around, Ratchet's wrench gets increased functionality and can be used to move objects in the game world to complete various puzzles and platforming challenges. Insomniac Games decided to have a greater focus on platforming in contrast to the previously combat heavy gameplay.

The gameplay is very similar to Ratchet & Clank Future: Tools of Destruction, but with a couple of new additions. The first of these is your new wrench: the OmniWrench Millennium 12. It has a new ability allowing you to tether things in the world such as platforms or bolts. The other big addition is Light and Dark gameplay, no this does not mean moral choices...

Instead this means that there are a lot of dark caverns in this game that ratchet has to go through. To get light he has to pick up bugs called heliogrubs that glow in the dark, making his wrench act as a torch showing him the road ahead and also keeping away the bat like aliens that inhabit the caves.

The game is fairly short, offering 3-5 hours of gameplay. Unfortunately, unlike other Ratchet and Clank games you can't play the game again on a harder difficulty after beating the game. You also can't jump to previous levels.

You reach Hoolefar Island after being shot out of a cannon in the intro sequence. You've lost all your weapons so you have to rely on your wrench to fight anything that's attacking you. Hoolefar island is exactly what you want out of a tropical island. You have sandy beaches, palm trees, and sunny weather. The island features a lot of elaborate platforming sequences involving saw blades, flamethrowers, laser grids, grind rails, steam geysers, catapults, and of course you're doing all this while walking straight up a wall using your gravity boots.

The only enemies you'll be seeing here are Anthropods, small red creatures that burrow underground waiting for their prey. These were seen on Sargasso from Tools of destruction.

Morrow caverns are the last known location of Captain Angstrom Darkwater's ship and corpse. The caverns are dark and filled with the corpses of Darkwater's crew that were killed when Slag took over. You come here for Darkwater's treasure map that shows the location of the Fulcrum Star. Rusty Pete offers to help guide you through the caverns and has his old Captain Slag's head with him. On your way to Darkwater's ship, you only need to worry about the bats that inhabit the cave. You do this by carrying a hologrub on your wrench. This scares off the bats because they're scared of the light. After you reach the ship, Rusty Pete betrays you and brings Darkwater back to life along with the rest of his undead crew. You then have to fight off the ghost pirates as you make your way out of the caves.

After you escape the Morrow Caverns, you follow Slag/Darkwater to stop them from getting their hands on the Obsidian Eye. When you arrive, the Mayor of the Hoolefoids gives you two more weapons to help you in the defense of the island. Immideatly after this, the ghost pirates arrive at the island. The world becomes foggy and green. You then have to fight through waves of Space-robot-pirates (or Decatroids to be precise) while the pirate captain fires cannons at you from his ship. There are also two Enforcers there for no good reason. You have to destroy the ships' cannons to force them to retreat. After you defeat them, the island returns to normal and the Hoolefoids come out of hiding. You then have to pay the Smuggler to translate the Decatroid map.

The smuggler leads you to Darkwater Cove where Captain Darkwater hid al of his treasure. You get in by convincing the Gatekeeper that you're actually Angstrom Darkwater. But they remain suspicious of you so you have to solve some puzzles to prove that you're the dreaded Pirate Captain which makes a lot of sense of course. The first is the Angstroms Song where you have to play Darkwater's Concerto of Doom. The pirate plays a part and you have to match him. The second is Angstrom's Brew where you have to solve riddles to figure out what to put in the drink. The third is Angstrom's Shadow where you have to align pieces to make the shadow of Angstrom appear on the wall. When you do this you are ambushed by some pirates. After that you get into the treasure room only to fall into a trap.

After falling into the trap in the treasure room, you find yourself in the Lythoin caves, the Catacombs beneath Darkwater Cove. You have to find your way out if you want to save Talwyn. Sadly Darkwater has sent his ghost pirates to get rid of you once and for all. This is very similar to the Morrow Caverns, it's again dark, there are bats, and sometimes you have to fight pirates. The end of the level has a boss fight against a Rogue who is a giant Pirate with a cannon on his arm. After you defeat him you reach the bay and you and the Smuggler follow the Pirates out to the Azorean Sea.

You follow Darkwaters ship out to the Azorean Sea to end this once and for all. The level is basically a boss fight against Darkwater and Slag. If he is Darkwater he can only be hurt by throwing ghost skulls at him, once you hit him once or twice, he will turn into slag allowing you to hit him with everything you got. The fight consists of stages across multiple ships with regular enemies in between. Once you defeat him you get the Fulcrum Star and find out where Clank is located.

The story of Quest for Booty is told by Rusty Pete, Captain Slag's trusty sidekick. The story starts with an opening a storybook and narrator talking scene. Rusty Pete then recaps the story of Tools Of Destruction briefly and then sets up the first mission.

The story of Quest for Booty is focused on Ratchet searching for Clank and continues the story from Tools of Destruction. Ratchet and Talwyn fly up to a floating pirate base on Planet Merdegraw with Aphelion. There, they start searching for Captain Darkwater who was an expert on Zoni culture, only to encounter Rusty Pete wandering while holding the head of Captain Slag. This attracts the attention of some pirates and a Rouge. The Rouge shoots Ratchet out of a cannon only to have him land on an adjacent pirate ship. Ratchet and Talwyn fight through the fleet and Ratchet catapults himself to another ship. They fight some more enemies and Ratchet catapults himself to another ship but ends up flying into a cannon. Talwyn is also thrown into the same cannon. The Rouge commands the pirates to blast them towards Morrow Caverns so Pythors can devour them. Rusty Pete pretends to be Captain Slag by putting his head on and successfully fools the pirates. He commands the Rouge to shoot Ratchet and Talwyn towards Hoolefar Island, where they will find exactly what they're looking for. The Rouge mercilessly agrees and the pirates blast Ratchet and Talwyn towards they island.

Hoolefar Island is an island on Merdegraw, a tropical, pirate infested planet that has been spared from Tachyon's wars. Hoolefar island is home to the Hoolefoids, a purple fish-like race. The Hoolefoids are known to be huge Ratchet fans and you can often hear them talking to one another about Ratchet's various adventures. They also want Ratchet to be their new leader as they are not happy with their current ruler, Barnabus Worley; however, that story thread never progresses beyond that.

Ratchet wakes up on the shore of Hoolefar Island and sees Clank trapped in an energy field. Clank says something then disappears. Ratchet and Talwyn traverse the wilderness and Ratchet zip lines toward the beach, where they are greeted by Barnabus Worley, the Mayor of Hoolefar Island. Mayor Worley tells them the supply beacon won't work so they can't send out messages. Ratchet fixes the 5 wind turbines, but the beacon operator tells him that someone uncoupled the power couplings and that they need a Standard GrummelNet Versa Bolt to reconnect the couplings. Ratchet buys one from the Smuggler for 10,000 Bolts. The operator fixes the bolt in and Ratchet cranks it. The couplings work and a bridge opens to a Grav-ramp with a trapeze that leads to the top of the beacon. Ratchet traverses it and cranks one final Versa Bolt and powers the beacon. The Mayor shows Ratchet The Obsidian Eye, the most powerful lorernthzian telescope. It does not work as the Obsidian Eye's power source; the Fulcrum Star is guarded by Darkwater's body in his ship. Ratchet decides to find it. Rusty Pete arrives at the island and tells them of Darkwater's ship and brings them to Morrow Caverns where it is hidden.

Talwyn accidentally gets trapped behind a door. As soon as Ratchet boards the ship he finds Darkwater's dismembered head. He picks it up and a map that falls out. Rusty Pete tells Ratchet he'll check for booby traps and sneaks over to Darkwater's body. He double crosses Ratchet and sticks the head of Captain Slag on Darkwater's body. Slag possesses the body, but so does Darkwater. Ratchet frees Talwyn from a cave and runs from Morrow Caverns, with Slag/Darkwater sending re-animated pirates after them. They get to Hoolefar island on a sail barge just as Slag/Darkwater attacks and they defend the island from him.

Afterwards they get the The Smuggler to decipher the map. It is the map to Darkwater's cove, an island where Darkwater hid his treasure. Ratchet proves himself as Darkwater and they get into the treasure room, but as Ratchet runs to the star, a hole opens up and he falls down. Slag appears and takes Talwyn. Ratchet escapes from the Lythoin Caves he was trapped in and flies with the Smuggler to Slag's fleet. He frees Talwyn and they confront Slag/Darkwater. They defeat him, which breaks the curse that brought the pirates back to life. Slag falls into the sea and Rusty Pete drops the Fulcrum Star and jumps in after him.

Ratchet grabs the Star and heads back to Hoolefar Island and powers the Obsidian Eye. He sees Clank surrounded by Zoni. They tell him "The Doctor" is coming soon. A door opens and a figure descends down the stairs. He slips on a duster and falls down. He gathers himself up and reveals himself to be Dr. Nefarious followed by his butler, Lawrence. The coordinates lead Ratchet to the Breegus Nebula.

Unlike Tools of Destruction, this game does not offer any upgrades to your weapons other than leveling it up. 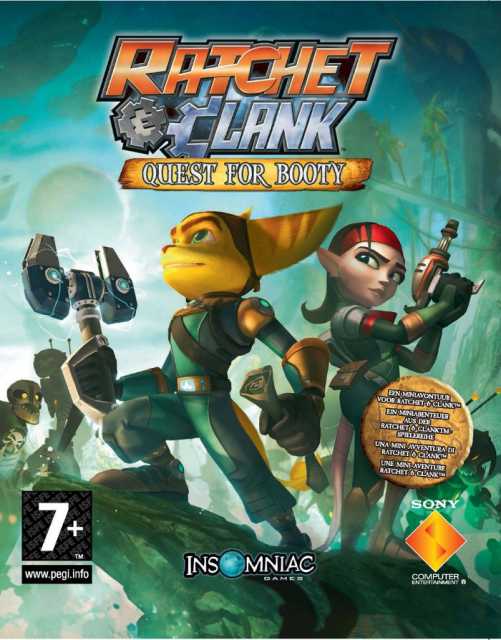