Deadly Creatures is a Nintendo Wii-exclusive game. The player takes control of either a tarantula or scorpion depending on the level.

Deadly Creatures takes place in the Sedona Desert of Arizona. Players alternate between a tarantula and a scorpion each level. Billy Bob Thornton and Dennis Hopper lend their voices to the game, as human lowlifes searching the desert for a lost cache of riches.

The story is presented as an interweaving of the point of view between the two arachnids. When the scorpion's level ends, it picks up where the tarantula's ended, and vice versa.

Each insect has different methods of attack and abilities; the Scorpion is a great melee attacker, while the Tarantula fights more strategically. By pressing specific buttons and performing certain motions the insects vary their attacks.

Deadly Creatures is host to a fair amount of exploration aside from combat. Each creature can climb around the map and onto walls and ceilings, completing various objectives including collecting grubs and killing specific creatures.

Between the two characters, gameplay and level design is altered greatly. The tarantula's levels are more open and non-linear with a focus on stealth and exploration. The scorpion's levels are more linear in structure, and focus on combat and action.

The tarantula later crosses paths with two humans who are searching the desert for something. The first is George Struggs, who has hired a man known only as Wade to help him.

Later on, the tarantula is ambushed by a rattlesnake, who is fought as the game's first boss. After escaping the snake, the tarantula keeps on the trail of the humans, before she meets the scorpion from the beginning of the level again. The two of them battle fiercely, and the scorpion is forced into a crevice, which caves in and prevents the tarantula from following.

The player assumes control of the scorpion for this chapter. The scorpion falls deeper into the crevice after escaping the tarantula, and finds himself in a series of large tunnels.

The scorpion must fight his way past the tunnel dwelling creatures to escape from the treacherous tunnels beneath the dead bush.

Having driven the scorpion back, the tarantula continues on with her life, trying to survive the harsh desert.

She wanders her way to a dead rose bush. But, the deeper she explores, she finds that it is home to a colony of vicious black widows.

The rattlesnake from chapter 1 is still after her. The tarantula manages to keep ahead of it, while avoiding the traps of the black widows. After escaping from the black widow colony, the rattlesnake corners her, ready to fight again. Before the two can do battle, George Struggs notices the snake and captures it for display at his gas station.

The scorpion has escaped the tunnels beneath the rose bush, and continues his quest for survival in the desert.

Survival is made difficult by the presence of tarantula hawk wasps that are patrolling the air. After surviving an attack by a rogue wasp, the scorpion makes his way to invade the wasp hive, which is in the hollowed inside of a saguaro cactus.

The scorpion's intrusion is not taken lightly. The wasps viciously attack, but are outmatched by the scorpion. Once the hive is taken, the scorpion burrows his way deeper inside.

The tarantula has avoided another run in with the rattlesnake. She continues her life's mission of self-preservation, but finds that the wasps around the area have grown agitated.

As a tarantula in tarantula hawk wasp territory, she finds herself very vulnerable, and makes her way to safer grounds. On the way, she encounters Struggs and Wade again, who have discovered a vital clue to what they are searching for.

The tarantula discovers that lizards have set up a den nearby, and she goes to clear them out. However, the way to there is through the remains of the wasp hive. After defeating the few remaining wasps, she goes to the lizard's den, where she eliminates the threats to her hunting grounds.

Out of the den, she finds herself in a desert landmark known as Octopus Canyon, a large crevice in the ground that is occupied by a large cactus.

The scorpion has escaped the wasp hive and by coincidence finds his way into Octopus Canyon as well.

The creatures who live there are cruel and vicious. And after disposing several of them, he once again crosses paths with the tarantula who he has been fighting since the first level.

The tarantula runs off and the scorpion gives chase, ready to finish their fight. However, he loses sight of the tarantula and has to fight his way to escape the canyon.

The scorpion ends up fighting his way into a rat's nest, which proves quite the challenge for the little arachnid. Eventually, he finds his way out to a more spacious hole with a curious ceiling.

After she had easily eluded the scorpion tailing her, the tarantula continues to fight her way out of Octopus Canyon.

She is soon cornered by a pair of geckos, who accost her for intruding their den. After defeating the lizards, the tarantula witnesses Struggs and Wade digging a box out of the ground. The box is opened to reveal gold coins from the Civil War, which had been hidden in the desert. In an act of betrayal, Struggs knocks out Wade and takes the gold for himself.

The tarantula crawls over Wade's unconscious body, and finds her way to the wreck of an overturned pickup truck. There, she searches for food in the cabin, but has to escape from other predators through the undercarriage.

After escaping through a broken headlight, the tarantula is able to make it back to solid ground, where there appear to be no predators. At first, it seems that she is home free. Until she is noticed by George Struggs, who picks her up to a fate unknown.

The scorpion had been just underneath the treasure box that Struggs and Wade were digging up, forcing him to dodge their shovels. In the middle of it, the gila monster from chapter 2 reappears to attack, but is killed by Wade's last strike of a shovel.

After the box is lifted, the scorpion crawls away from Wade's unconscious body and wanders into the overturned contents that had spilled form the overturned pickup truck in the last chapter.

The junk has become the home of many desert creatures, which the scorpion once again fights past. He reaches a culvert and escapes into the pipes, where more adversaries await.

He climbs through miles of aqueducts and plumbing, until he finds the hiding place of George Strugg's ill-gotten treasure. Beyond that, he finds his way into some unused indoor plumbing.

The tarantula has been taken to Struggs's gas station, where she sees that other desert insects and arachnids have been turned into souvenir paperweights for tourists and other passersby. In the terrarium next to her own, the rattlesnake that had attacked her in the first chapter sits, staring angrily at the spider.

Not about to forfeit her life so easily, the tarantula escapes and wreaks havoc through the gas station, freeing all of the other imprisoned insects in the process. Along with them, the rattlesnake escapes as well.

The tarantula escapes out of the gas station by crawling through a hole in the wall that is covered by a stuffed deer head. As she escapes through the walls, she hears Struggs enter his station and do battle with an unseen assailant.

She escapes to the outside of the gas station, ready to return to her desert home. Unfortunately, the rattlesnake finds her and attacks. Due to a freak accident, they are surrounded by a ring of fire, leaving no escape for them.

The two animals take their fight up the side of a dilapidated gas pump, until the tarantula is able to make a daring escape that nearly costs her life. Just then, George Struggs bursts through the front door of the station.

The unused plumbing that the scorpion had discovered turns out to belong to the out of order toilet in Strugg's gas station.

After crawling from his porcelain portal, the scorpion fights his way past the pests who have taken up residence in the restroom. From there, he crawls his way into the gas station's interior, just as Struggs enters to find the mess that the tarantula had made.

Seeing that the rattlesnake has escaped as well, Struggs arms himself with a shotgun to safely dispatch the snake. The scorpion makes his presence known by attacking Struggs, who fights back with his gun to kill the arachnid.

Once the fight has carried on, with the scorpion winning, Struggs fires again and blows a hole through the front door. The scorpion makes his escape through the door, followed by Struggs, who takes one last shot at his diminutive opponent.

His shot misses and hits the gas pump that the rattlesnake is sitting atop. The resulting explosion destroys the gas station, kills the snake and puts Struggs in a coma.

Beyond the wreckage of the gas station, the tarantula and scorpion have both survived the blast and face off once again. This time, however, they slowly back away from one another, not daring to face each other in combat again. Once they have gone, a single gold coin rolls into view and falls flat on the ground. 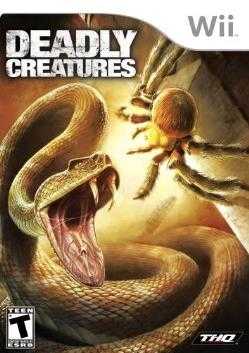