Take on the role of Dr. Vincent Gilgamesh as he uses space and time to prevent the Tiamatians from taking over Earth.

Time Slip is a 1993 Super Nintendo Entertainment System game developed by Sales Curve and published by Vic Tokai. The game is very similar to the Contra franchise (more specifically, Contra III: The Alien Wars), but was criticized for being of exceptionally lower quality. The game was criticized for its poor artificial intelligence, sloppy control, no continues, and general lack of challenge. Reviewers agreed that the game's music was its best aspect. Time Slip holds a 36% average on Game Rankings.

Time Slip stars Dr. Vincent Gilgamesh, a scientist from the year 2045 who discovers an alien plot to take over Earth. To prevent an invasion of an alien race called the Tiamatians, Dr. Gilgamesh travels to various eras of time to defeat the aliens (as they have found a way to exploit rifts in time).

The background of the Tiamatians is simple; they are from the planet Tiamat. The aliens want to find a planet similar to Tiamat, so they send a probe through the rift called the Torquemada II. Through use of that probe, they find Earth, and intend to turn it into Tiamat II. By then, scientists on Earth have discovered the rift as well, and have been studying it for years.

If the player gets a game over during gameplay, Dr. Gilgamesh fails to prevent the aliens from conquering Earth, and it is hinted that his birth is even prevented.

The game is very similar to Contra III: The Alien Wars. Even movements mirror those of Contra III. Time Slip does have its numerous differences, however. One such differences is the TGS bar (essentially a power bar, that must constantly be refilled). This TGS bar is what keeps Dr. Gilgamesh alive, and if it runs out he dies. To refill the bar, players must be picking up crystals scattered throughout the levels.

Every level is filled with various enemies, a mid-level boss, and a level boss. The game was notoriously easy, even with its later bosses. Scattered throughout the levels are traps based on the time period Dr. Gilgamesh is in. Similarly to Contra III, the player can upgrade weapons as gameplay progresses. By picking up power-ups (found in boxes that must be "shot" open), the player can improve the weapon (although these upgrades are lost after death). Time Slip even contains some vehicles for the player to use, although they do not dramatically alter gameplay.

Time Slip, unlike Contra III, has no continues, and rather starts the player out with nine lives. In addition, there is no code to expand the player's lives (Contra III contains the famous Konami Code). Time Slip has no way to save the game either, and no password system, so if the player dies, they have to start completely over. 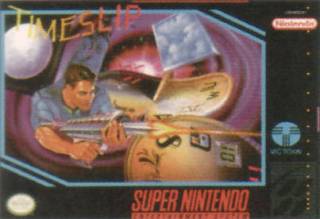