A spin-off of the Oddworld series, Oddworld: Stranger's Wrath attaches an unrelated shooter to the beloved franchise as players undertake the role of a mysterious bounty hunter known as Stranger, who seeks to make a living in Oddworld's rugged West.

Oddworld: Stranger's Wrath follows a bounty hunter named simply Stranger. In the beginning of the game, Stranger captures numerous criminals to pay for a mysterious operation. As Stranger returns the criminals for their retrospective bounties, Stranger hears of a town of creatures called Grubbs. The Grubbs have been besieged by a demonic creature, and his army of minions. The Grubbs were once protected by a race called the Steef, now extinct, leaving them unprotected.

As Stranger continues to collect bounties, he finds that a man named Sekto has been drying up a river in the Grubbs town. When Stranger confronts him, Sekto offers him a bounty for the remaining Steef that he believes that are still around. The Stranger refuses this offer, leaving Sekto upset. Sekto hires a criminal, D. Caste Raider, to capture and interrogate Stranger.

As D interrogates Stranger, he discovers that Stranger himself is a Steef. Stranger escapes from the raiders, killing all of them in a large explosion, and runs back to the Grubbs town. As he returns to the town, he realizes that the demon that he first heard about is Sekto. Stranger kills Sekto, and the remaining raiders, as well as destroying the dam that was drying the town of it’s water. But as Sekto lies dying, the Stranger sees that the demon was possessing Sekto, who was also really a Steef. The demon escapes, as it goes into the now flowing river.

The game is split between third-person platforming and first-person shooting. The player progresses through the game by taking bounty missions that

consist of trekking though waves of enemies to fight unique bosses. All enemies can be "bountied," which allows the Stranger to cash them in at the bounty store. Moolah, the currency in this region of Oddworld, is received for the Stranger's help in cleaning up the area. Moolah can be spent on upgrades and ammo in the store. Enemies are worth more alive than dead.

Most of the combat centers around Stranger's crossbow, which can be loaded with special creatures from the world. This concept is known as "live ammo". The live ammo types all have their own personalities, not to mention their own unique functionality. Each type of live ammo has an upgraded, more powerful version:

On September 3rd 2010, the UK-based studio Just Add Water announced it was working on an enhanced remake of the game to be released for download on the PS3. It was planned to be released around Easter 2011, but was delayed until December 27, 2011.

Here's the list of improvements as mentioned on the US Playstation Blog.

On June 7th 2011, Just Add Water also announced a version of the game for the PlayStation Vita via twitter. Saves are set to be cross-platform with the PS3 using the cloud. 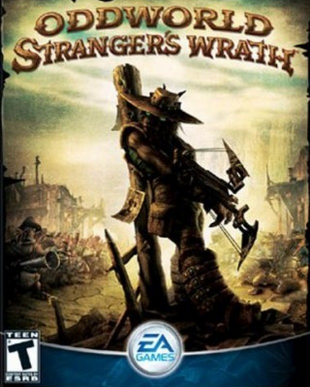