The Precursors is a role-playing game that blends the elements common to the genre with first-person shooting, mech combat, and space simulation. The game takes place in an open world-universe, wherein the player can travel through space and explore a multitude of planets scattered throughout the universe.

The player takes on the role of a young pilot of the humanoid Amarn race. Fresh from the academy, a virtual reality experience sent him to the single Amarn colony planet Goldin to serve his people. Captain Ridiger, a friend of the pilot's late father, becomes a mentor of sorts and offers him his father's old spaceship -- provided he can find a way to power it.

Players choose to perform missions for either Ridiger, the civilians, or the bandits on Goldin to acquire the missing power cell for the spaceship, all the while talking and fighting in FPS/RPG hybrid style. With access to a variety of weapons and perks, the player and three teammates complete missions in order to uncover a secret of the Precursors, an ancient race that threatens to upset the natural balance of galactic powers.

After completing several other missions, the pilot is sent on a more critical quest away from the planet, first to another planet called Gli. An avian race called the Clatz fight among themselves in two factions: the Clatz of the Nest, and the revolutionary Clatz. The next planet to visit is Reandore, which is actually a rocky moon. Here the Empire and Free Traders war against one another.

The Precursors, a mythical race of ancient times, have since disappeared leaving behind odd pyramids on many planets and moons. A religious cult on Goldin worships the Precursors' pyramid, while on Reandore a laboratory tries to unlock the secrets of the pyramid.

Each level leads the player on an exciting adventure to faraway, celestial bodies where missions include choosing sides while fighting in intergalactic wars. 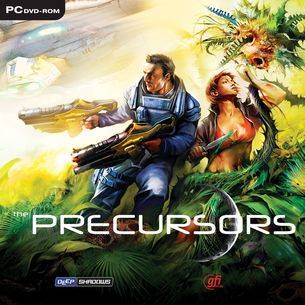